A strange illness was spreading throughout Tigray, the northern region of Ethiopia. The Ethiopia Ministry of Health and Ethiopia Health and Nutrition Research Institute (EHNRI) asked CDC and other partners to help them investigate the outbreak of what was then called “unidentified liver disease” (ULD).

By the time the CDC team and colleagues arrived in 2011, EHNRI was ready for them. The Institute had already used the new surveillance system to identify the ULD patients who were willing to participate in the investigation. From this group, the team enrolled 46 patients and 22 family members. Investigators collected medical histories, conducted physical exams, and gathered blood and urine specimens and environmental samples for pyrrolizidine alkaloids (PA) testing. Doctors also took liver biopsies from some patients to help scientists understand how ULD affects liver tissue.

Laboratory tests showed that patients with ULD and even some of their family members who did not have any ULD symptoms had signs of liver abnormalities that could be caused by pyrrolizidine alkaloids (PA) exposure. But were these abnormalities specifically because of exposure to PAs? Investigators knew that the right blood tests could confirm that.

And for the first time, such a test was finally available. By 2011, the Chinese University of Hong Kong had developed a laboratory test to determine whether people had been exposed to PAs. This new test had been used only a few times in China, but seemed to be just what was needed for the investigation. So, CDC epidemiologists negotiated with the Chinese lab to process the blood samples from Tigray.

Epidemiologists also gathered information about how people took care of their crops and animals and what people ate and drank. Investigators also collected samples of grain, honey, and drinks, such as a local alcoholic beverage and milk, from households with and without the disease.

CDC got critical help from the Poisonous Plant Laboratory of the U.S. Department of Agriculture. They analyzed the grain collected in the Tigray study and found important information. Grain PA levels were significantly higher in ULD households. Some grain types were more contaminated than others. The PA that was most commonly detected and at the highest levels was from a new plant source, Crotalaria, previously unidentified in this investigation, but known to cause toxicity and death in other parts of the world.

CDC’s Colleen Martin, MSPH, was alone in her office the day that the test results came in from the Chinese University of Hong Kong. She was so eager to see what they revealed that she analyzed the data in just one day. The results affirmed their hypothesis—50 percent of the ULD patients had test results indicating they had been exposed to PAs.

Even though researchers can now more accurately pinpoint the cause of this deadly disease, there is no cure. Therefore, to eradicate the disease in Tigray, eliminating the source of the toxin is essential. 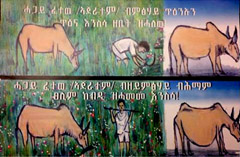 Poster educating villagers. TOP: "Remove the weeds from farm field to protect yours and your domestic animal health." BOTTOM: "By not removing the weeds from the field you are exposing your animal to liver disease."

Health workers also are telling farmers to monitor the health of livestock that can contract the disease by eating toxic weeds, since consuming milk or meat from contaminated animals can be another source of exposure to PAs.

Not all disease investigations have such a clear outcome, but the ULD study is an example of epidemiology and laboratory science at their best. Thanks to the skilled work of many collaborators, the term “ULD” is now outdated. The disease is now called “pyrrolizidine alkaloid-induced liver disease” (PAILD) for the toxic PA that causes the illness. More important, grain farmers in Ethiopia now have the information they need to protect themselves and their families from a once mysterious and sometimes fatal disease. 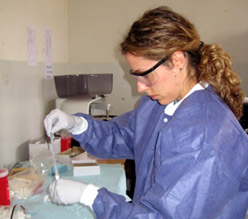 Danielle Buttke takes a sample from a goat herd.