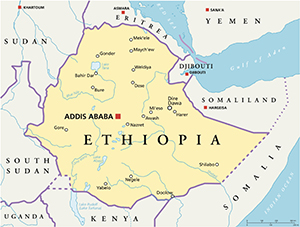 The Akaki River in Ethiopia flows from north to south and passes through the densely populated residential, commercial, and industrial areas of Addis Ababa, the Ethiopian capital city. The river is potentially polluted by various discharges from tanneries, breweries, wineries, battery factories, and slaughter houses. These pollutants are discharged directly into the river either before or after partial treatment. In addition, domestic wastewater, human excreta, and surface run-off contribute to Akaki River pollution. As a result, high concentrations of metals (arsenic, cadmium, chromium, cobalt, copper, lead, manganese, mercury, nickel), nitrates, coliform, and other pathogens have been found in the surface and ground water and its surrounding soil.

Despite its bad odor, black color, and potential toxicity, the river is still used for various daily activities, including laundry, bathing, swimming, irrigation, and drinking. One population particularly at risk is the Akaki-Kaliti sub-city. However, no health impact studies of exposure to the Akaki River have been conducted. Thus, the objectives of this study were 1) to characterize trace metal exposures 2) compare trace metal exposures between residents of the Akaki-Kaliti sub-city to residents of a nearby region that lacks direct exposure to water from the Akaki River; and 3) provide the Ethiopian Federal Ministry of Health with information to assist in making regulatory decisions regarding discharge into the Akaki River.

Most of the exposures found during this investigation seemed unlikely to cause acute health effects based on on known toxic thresholds. However, toxicity data for many of the metals were very limited.