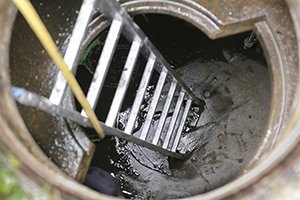 Households with chronically ill or medically impaired individuals are often provided cisterns (underground storage tanks) from the Indian Health Service (IHS) as a “medical referral”. There is great concern from the Navajo Nation Environmental Protection Agency (NNEPA) that these cisterns may actually become a health hazard due to biological and chemical water contaminants.

To determine whether cisterns on the Navajo Nation contain biological or chemical contamination at levels that can cause human health effects, water samples were collected and analyzed for biological contaminants such as total coliform, E. coli, Cryptosporidium, Giardia, norovirus, enterovirus, legionella, and Salmonella. Water samples were also analyzed for chemical contaminants such as arsenic, uranium, cadmium, and lead, as well as nitrates and atrazine.

Thirty-nine percent of the study population had urine uranium levels that were higher than the 95th percentile of 2007–2008 NHANES. Bacterial contamination levels were higher in hauled water samples, indicating the need for safe water hauling and storage practices and educating the public about potential health risks associated with unregulated water sources.