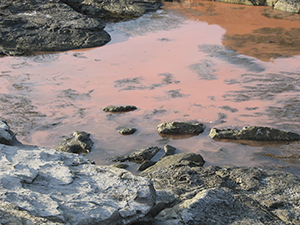 Karenia brevis (formerly Gymnodinium breve) is a marine dinoflagellate responsible for red tides that form in the Gulf of Mexico. K. brevis produces brevetoxins, the potent toxins that cause neurotoxic shellfish poisoning.

There is limited information describing human health effects from environmental exposures to brevetoxins, including anecdotal information from lifeguards, who are exposed to marine aerosols during their job-related activities.

To examine the effects on self-reported symptoms and pulmonary function from inhaling aerosolized brevetoxins during red tide events, HSB recruited 28 healthy lifeguards who were occupationally exposed to red tide toxins during their daily work-related activities.

HSB found that compared with unexposed periods, the group of lifeguards reported more upper respiratory symptoms during the exposed periods.