Two categories of chemical warfare agents are found in the United States:

In 1986, enactment of PL 99-145 (50 USC 1521) mandated destruction of any stockpiles of lethal chemical agents. In 1997, the United States ratified the Chemical Weapons Convention Treaty. The United States thereby agreed to destroy any remaining stockpiles of chemical warfare agents no later than April 29, 2012 (revised date). Read more about the History of U.S. Chemical Weapons Elimination.

From World War I to the early 1960s, the amount of chemical warfare agents stockpiled in the United States is thought to have reached nearly 40,000 tons. These chemical warfare agents were stored in bulk containers or as assembled weapons and ammunition at nine sites in the United States. The chemical agents stored at U.S. sites include nerve agents and vesicant, or blister agents.

Chemical warfare agents at seven of the nine chemical disposal facility sites have been destroyed and those facilities are closed. Facilities are under construction at the two remaining sites. Read more about Closing U.S. Chemical Warfare Agent Disposal Facilities. 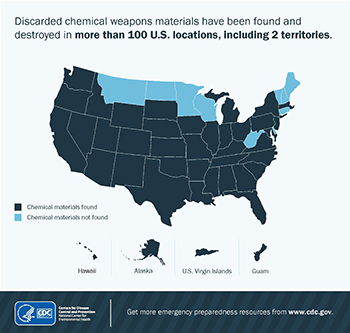 Click above for an overview of chemical weapons recovery.

Some chemical warfare items have not been stockpiled. These nonstockpiled items include

Some estimates suggest that these items remain at more than 100 sites in the United States and its territories. These items will require management for years to come.

The Centers for Disease Control and Prevention (CDC) provides independent oversight to the U.S. Army’s chemical weapons elimination program and serves as an important element in ensuring the safe destruction of chemical warfare material for protection of public health. The team’s focus is prevention with vigilance. Read more about CDC’s role in Elimination of Chemical Weapons.

CDC also provides DoD with recommendations to protect public health and to provide technical assistance regarding: