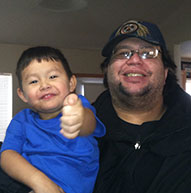 "There’s a lot of pressure for kids to smoke because of the spiritual uses of tobacco on the reservation." – Christopher Hillert

Christopher Hillert was hooked from the first drag that he took from a cigarette as a college student at the University of Wisconsin at Superior. Within a short period, he developed a pack-a-day dependency that lasted more than a decade.

Hillert, who is now smoke-free, credits a three-day CDC-supported smoking cessation camp at the Red Cliff Indian Reservation in Great Lakes Inter-Tribal Council, Inc., Wisconsin, for putting him on the path to health.

American Indians smoke at rates higher than any other ethnic group. Hillert explained that his community’s acceptance of smoking is partly tied to the fact that many use tobacco for ceremonial purposes.

The smoking cessation camp brought together approximately 20 members of the Red Cliff community to tackle their smoking habits in a culturally sensitive manner. A key focus of the workshop was to distinguish between smoking tobacco for ceremonial purposes and smoking commercial tobacco. As part of the camp, a medicine man and his wife were on hand to dispel misbeliefs about commercial tobacco as an accepted cultural tradition.

"There’s a lot of pressure for kids to smoke because of the spiritual uses of tobacco on the reservation,” said Hillert. "But this is very different from smoking commercial tobacco.”

After pledging not to smoke during their time in the camp, Hillert and his peers learned about commercial tobacco dependence, the health consequences of tobacco use, and how to quit using it. Hillert said one factor in his decision to stop smoking was seeing images of lungs damaged by cigarette use.

While at the camp, participants received nicotine replacement therapy, which they could continue after the program’s conclusion. Hillert himself chose to go cold turkey and focus on dealing with his cravings by addressing the underlying causes of his addiction.

"You have to understand why you smoke,” said Hillert. "Do you have an oral fixation, need the nicotine fix, or are you smoking for the social aspect? The workshop gave me the tools to recognize the root of my habit and move past it.”

Perhaps most important to Hillert in staying smoke-free has been the newfound knowledge that smoking harms others around him. "I stopped because I was hurting my wife and my nephew [with secondhand smoke exposure],” he said. "I didn’t realize even having smoke on your clothes can be bad for others around you.” 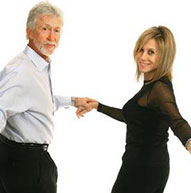 "The changes have been absolutely positive." – Jackie McGee

Jackie McGee, a vibrant 56-year-old dancer, loves to Shag. She’s been performing the 1940s swing-style dance form in competitions and clubs for more than 30 years. After moving to North Myrtle Beach, South Carolina, however, McGee had to put her pastime on hold. McGee, who suffers from asthma, couldn’t breathe while dancing in the city’s smoky bars and nightclubs. Now, nine years later, McGee is back on the dance floor and can dance in smoke-free air.

"The changes have been absolutely positive," said McGee. "The smell of smoke has faded and I no longer get sinus infections and colds from inhaling smoke."

McGee also can dance at bars and clubs without suffering asthma attacks, which she said has given her the confidence to go out more often. "I can stay out now, have fun and teach Shag," she said.

Since North Myrtle Beach increased smoke-free protections, McGee has seen an increase in the number of people attending Shag events hosted by the city. "People don’t want to be exposed to smoke," she said. "For the first time, people with emphysema were able to make it out."

Nearly one-quarter of adults in Horry County, where North Myrtle Beach is located, are smokers. To reduce smoking prevalence and protect residents from secondhand smoke exposure, the county has partnered with several communities, including North Myrtle Beach, on smoke-free initiatives. Initiatives include the following activities: 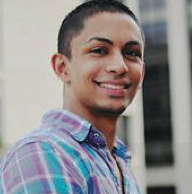 "I just feel better after I get home from work." – Mazher Mulla

Mazher Mulla, a 25-year-old Birmingham, Alabama, bartender, no longer has to face what was once his greatest occupational hazard— secondhand smoke. In May 2012, nearly all public places and establishments in Jefferson County, where Birmingham is located, went smoke-free, including the bar where Mulla works.

Breathing smoke-free air has been nothing short of transformational for Mulla. "I just feel better after I get home from work," he said. "I don’t feel as exhausted, I can breathe easier, and my clothes don’t smell."

Mulla said the smoke would often make him sick and impair his ability to exercise. Since his bar went smoke-free, Mulla said his health has improved significantly.

Despite the negative health effects of secondhand smoke, Mulla said he couldn’t have afforded to quit his job. Like many bar and restaurant workers, he depends on the income to make ends meet. "Leaving there would have been a big financial blow to me," he said. "Fortunately, it’s just so much better now."

In addition to ensuring residents are not exposed to secondhand smoke in public places and establishments, Jefferson County implemented a number of other measures to decrease tobacco use. They included recruiting 34 convenience store owners throughout the county to voluntarily display tobacco warnings at the check-out counters or other visible areas; promoting the Alabama Tobacco Quitline; raising awareness of tobacco cessation resources and the dangers of secondhand smoke exposure to 500 faith-based congregations; and educating 106 work sites about smoke-free policies and the importance of offering tobacco- cessation resources.