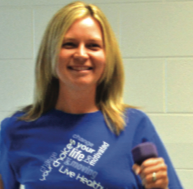 "I've learned how to live a healthier lifestyle." – Cynthia Beaudoin

As an elementary school teacher and mother of a two-year old son, Cynthia Beaudoin has little time outside of work to exercise. But when her employer, the Pitt County (North Carolina) School System, introduced a worksite wellness program, Beaudoin found the inspiration to be more physically active.

Now, with the support of a colleague, Beaudoin is active nearly every day after school. She takes advantage of a new walking path around her school and participates in aerobics, walking, and Zumba. To track her progress towards fitness, Beaudoin records the number of minutes she exercises each day on a web site that the school system set up. She also tracks the distances she walks using an employer-provided pedometer. "I have asthma, and when I first started the program, I thought I was going to die," said Beaudoin. "But now, it’s no problem."

Since taking part in the program, Beaudoin has lost 18 pounds. As she has become healthier, she feels happier and has more energy for her students and her child.

A key component of the wellness program is promoting healthy eating. Each Friday healthy recipes are e-mailed to teachers and staff. The school cafeteria also has started salad days. "This program has changed my thinking about how I look at food and exercise," said Beaudoin. "I’ve learned how to live a healthier lifestyle."

The wellness program is among a number of community initiatives designed to reduce the high prevalence of obesity in Pitt County, where nearly three- quarters of adults and more than one-third of children are overweight or obese. To make healthy living easier for its residents, Pitt County also increased the availability and affordability of healthy foods and beverages in convenience stores; established community gardens and new farmers’ markets; and provided more physical activity opportunities for children in afterschool programs. 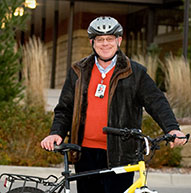 "Before the bike lanes were installed, I was more concerned about my safety when riding to work." – Dr. William Bucknam

William Bucknam, a doctor at Gundersen Lutheran, lives just two miles from his office. Until recently, however, busy roads and intersections posed safety concerns that prevented him from biking to work. Now, Bucknam is able to commute safely using new bike lanes designated exclusively for cyclists.

The installation of new bike lanes throughout La Crosse County, Wisconsin has made it possible for residents like Bucknam to safely bike to work and around town. "Before the bike lanes were installed, I was more concerned about my safety when riding to work," said Bucknam. But now, Bucknam uses his car just once a week in warm weather, opting to bike to work, the grocery store, gym, and library.

Bucknam enjoys the additional opportunity for exercise and the chance to decompress after work, stating that the addition of biking to his daily routine has "absolutely benefitted his own health both physically and mentally." He finds that exercise is a great stress reliever for him, explaining that "at the end of the work day, it’s good to pump those pedals and relieve some tension before I get home."

And if those benefits were not enough motivation, his employer, Gundersen Lutheran, promotes physical activity, such as biking, walking, and taking the bus to work, through contests and incentives. Bucknam shared that Gundersen Lutheran’s support of biking makes riding to work fun, rewarding, and convenient.

Physical activity will be possible for more residents of La Crosse, as the county quadruples the number of bike lanes and works to make streets safe for all users, including pedestrians, bicyclists, motorists, and transit riders. La Crosse County also implemented other initiatives to make healthy living easier, including increasing access to nutritious foods and beverages in vending machines, convenience stores, and school cafeterias, and increasing physical activity opportunities for children in afterschool programs. 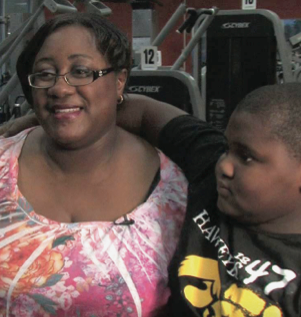 "When you participate in programs [At the Y], it forces things to happen for the better." – Shwana Garner

Shwana Garner, a 38-year-old resident of Hamilton County, Ohio, struggled for years with weight issues, high cholesterol, and hypertension. She knew her health depended on getting more exercise, but, until recently, few affordable options for physical activity existed.

After learning about a subsidized membership program at the YMCA for low-income residents, Garner decided to make a changes for herself and her family. "Joining the Y wasn’t just something that I needed," said Garner. "I wanted it for myself and my kids."

Since becoming a Y member, Garner, her son, and her niece have been using Y facilities regularly. Garner works out on weight and cardiovascular machines three times a week. Her son, who is autistic and has struggled with weight issues of his own, swims on the Y’s Special Olympics Team. Garner’s niece also swims regularly.

The Garner family not only has become more physically active, but they also eat healthier. Garner now regularly prepares nutritious meals using vegetables, such as tomatoes, okra, and peppers, from a home garden that her family recently started. "I’m taking it one step at a time to overcome my shortcomings," said Garner. "When you participate in programs [at the Y], it forces things to happen for the better."

Hamilton County's prevention program subsidized nearly 7,500 YMCA memberships for more than 23,000 low-income residents. The program was designed to improve access to physical activity in the community where nearly two-thirds of adults and one-third of children are overweight or obese. Other measures that the county undertook to make healthy living easier included increasing access to nutritious foods and beverages in vending machines, á la carte lines, and school stores. Residents also now have more opportunities to grow their own vegetables through 20 church-based community gardens, many of which are located in areas where the availability of healthy food is limited. 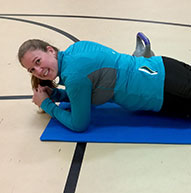 "It’s so nice and convenient to have this class in our community." – Tiffany Owens

Tiffany Owens, a resident of rural Independence County, Arkansas, knew she was overweight. She wanted to exercise more, but the nearest gym was 25 miles away. Now, as a result of an agreement between the county and the school district, she can attend aerobics and weight training classes a short distance from her home at Cedar Ridge Elementary School.

As part of an overall strategy to address obesity, Independence County has forged joint-use agreements with all four of its school districts. As a result, gymnasiums, athletic fields, and other facilities are open for physical activity after school hours. Owens works out twice a week at Cedar Ridge Elementary School, where she takes part in aerobics classes. The classes are offered four days a week, at one-hour intervals and made available to all Independence County residents.

"It’s so nice and convenient to have this class in our community," she said. "There are people there that I care about. We talk and laugh and burn calories."

Since she’s been exercising at the school, Owens has lost 32 pounds and is determined to lose more. "I have 20 more pounds to go," she said. "I’ve developed a new relationship with my workouts. I don’t like to miss my classes."

Regular exercise has led Owens to eat more healthy food. She has replaced fried foods with vegetables and fruits. "Exercising changes how you think about food," she said.

With an adult obesity rate of 29%, Independence County hopes greater access to physical activity opportunities will help curb the community’s high adult obesity rate. Other health initiatives provided by the county to combat obesity include the following: 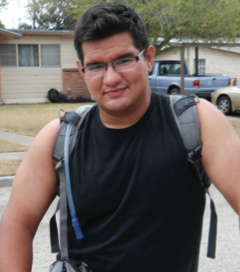 "I forgo the hamburger now and eat substantially less than I did before I started riding." – Joey Palacios

Joey Palacios, a 26-year-old journalist in San Antonio, Texas, has struggled with his weight since high school. Although he knew he needed to exercise more often, it wasn’t until San Antonio launched the B-Cycle bike-share program that he found the inspiration to be more physically active.

With the help of a friend who taught him how to ride a bike, Palacios now bikes as far as 15-20 miles a day, often running errands or taking scenic rides. For a modest membership fee, B-Cycle members can access bikes at more than 40 locations throughout the city. About 100 bikes are checked out every day.

Palacios has lost more than 35 pounds since he started biking and improved his diet. "I forgo the hamburger now and eat substantially less than I did before I started riding," he said.

Added Palacios, "I’m at my happiest after a 20-mile ride because my body feels good. It’s much better for you than stuffing yourself at an all-you-can-eat buffet."

In addition to the bike-share program, San Antonio has worked to decrease the prevalence of obesity through a variety of initiatives, including: the ¡Por Vida! restaurant recognition program to help residents make healthier food choices when dining out by identifying healthy options; installing fitness equipment stations in 22 parks and five libraries; and providing teachers in 361 schools with access to workshops, training tools, and physical activity equipment resources to increase the quality and frequency of physical education in schools. 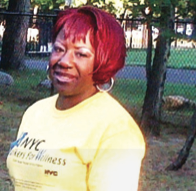 Joan Williams-Jarrell wanted to be more physically active for years. She tried working out at the gym, but often her schedule as a minister in her East Harlem church wouldn’t allow it. Always on the lookout for creative ways to bring people together, Williams-Jarrell found her inspiration to exercise in a New York City Department of Health program called "Walkers for Wellness."

With a group of other congregants, Williams-Jarrell walks three times a week on a 1.5-mile route around Harlem or through Central Park. "Walking is a great way to get people together," said Williams-Jarrell. "It allows us to have fellowship and be physically active at the same time."

Since participating in "Walkers for Wellness," Williams-Jarrell has lost 15 pounds. She also has seen improvement in her hypertension to the point where her doctor is considering taking her off medication. "I feel better, sleep better, and have more energy," said Williams-Jarrell.

A key component of the "Walkers for Wellness" program is better nutrition. In demonstrations led by the New York City Department of Health, Williams-Jarrell and her congregants have learned how to prepare healthy food using herbs as a replacement for salt. They also have learned about the importance of selecting healthy portion sizes and avoiding sugar-sweetened beverages.

"Walkers for Wellness" has attracted a total of 119 faith-based organizations in New York City, which represent more than 12,000 congregants of many faiths. Other initiatives that the city has undertaken to address obesity included improving the nutritional quality of the 800,000 meals served daily in its public schools; launching a salt-awareness initiative urging consumers to compare labels and select foods with less sodium; and increasing access to fresh fruits and vegetables through 46 grocery stores located in food deserts, where the availability of healthy food is limited.