My son, Cal, was born a healthy baby boy on March 23, 1995 in a large accredited hospital that delivers over 5500 newborns a year. Cal was first noted to be jaundiced through visual assessment at 16.5 hours old, but a bilirubin test was not done. 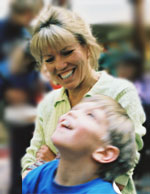 The information we received about jaundice was a simple brochure that never mentioned jaundice can cause brain damage. It was also suggested that we put Cal in the window for sunlight.

We were assured that Cal’s jaundice was normal and not to worry. We scheduled a routine follow up visit, for 7 days of age, with his pediatrician.

On day 4 Cal started to breast feed with a weak suck and became lethargic. I called the newborn nursery and told them that he was “still yellow, lethargic and was feeding poorly.” They asked me if I was a “first time mom” and then assured me there was no concern since sleepiness is to be expected. They told me to unwrap him and tickle his feet and if that didn’t work to call the pediatrician.

We immediately took Cal to the pediatrician and he noted the jaundice by visual assessment. A bilirubin test was not done. We were told to wait 24 hours to see if he would improve.

At 5 days of age, the pediatrician admitted Cal to the pediatric unit. Cal’s bilirubin was tested for the first time and it was 34.6mg/dl. An exchange transfusion, however, was not performed since the doctors recalled a recent “raising of the bar” from 20mg/dl to 30 mg/dl. Treatment was limited to phototherapy… and that phototherapy failed Cal.

On day 6 in the afternoon, Cal had a high pitched cry, respiratory distress, increased tone and he started to arch his neck in a way that is characteristic of opisthotonos; these behaviors were all acute symptoms of kernicterus.

Little did I know that my newborn son was suffering brain damage before my eyes and in my arms. I will be haunted by that memory and my failure to protect him forever.

At 18 months of age Cal was diagnosed with classic, textbook kernicterus. Cal has athetoid cerebral palsy throughout his body, neurosensory hearing loss, enamel dysplasia on his front teeth and crossed eyes and other abnormalities.

Today Cal cannot walk independently, his speech is impaired, he drools, and he has uncontrollable movements of his arms and legs just to describe his impairment a bit. When Cal gets sick he is reduced to the functional level of a 6 month old. Despite his limitations, Cal is a beautiful and inquisitive young man. He loves playing on the computer, swimming, his sister and Pokemon! He also enjoys creating movies, short stories, and poems.

Two and a half years after Cal’s birth we were blessed with the birth of our daughter, Mackenzie. At 16.5 hours, exactly the same timing of jaundice onset as Cal, jaundice was noticed. A bilirubin test was performed immediately and phototherapy was deemed necessary and initiated. Today we have a healthy daughter.

I was recently preparing a presentation that I often give to the health care community about Cal’s story and he asked me why his sister didn’t have kernicterus. I thought that was an excellent question and one that does not have an easy answer. I am incapable of explaining to my son the justification for his disability. It is precisely what motivates me to advocate for change in our health care system.

Cal’s brain damage was totally preventable and is the result of a tragic failure of our medical system. Unfortunately, the real tragedy is that Cal’s story in NOT unique. His story has replayed itself several times over the past decade.