Stories from People with Hemophilia 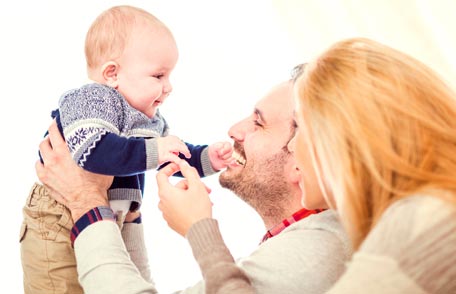 Read and share the stories of people with hemophilia to raise awareness.

Hemophilia is a hereditary (inherited) disease usually diagnosed soon after birth. People with hemophilia lack a protein (a clotting factor) necessary for blood to clot normally. This can lead to spontaneous bleeding, as well as bleeding following injuries or surgery.

“Matthew was born normally, with no complications. We knew he would have hemophilia and that was confirmed at birth, but he experienced no bleeds and required no treatment until he had an elective surgery at six months to correct a foot defect.” – Matthew’s Story

The best way to treat hemophilia is to replace the missing blood clotting factor so that the blood can clot properly. This is done by infusing (giving through a needle into a vein) commercially prepared clotting factor concentrates, a substance that helps people with hemophilia form blood clots to stop bleeding.

“During foot surgery Matthew had a device called a central line, placed in his vein to deliver his first doses of clotting factor. The plan was that we would begin routine preventative treatment, called prophylaxis, to reduce the number of bleeds that he might eventually have.” – Matthew’s Story

“Like many very young children with hemophilia, Caeleb started showing signs of his bleeding disorder with bruises from minor bumps. He was circumcised at 11 months and just would not stop bleeding. The doctor’s diagnosed Caeleb with a high titer inhibitor, which is an antibody that does not allow the factor to work to stop bleeding. His older brother who also had hemophilia also had an inhibitor at the same age.” – Caeleb’s Story

It is possible to develop long-term joint problems caused by the bleeding.

“Other challenges of living with an inhibitor that we’ve faced include management of short- and long-term pain from repeat joint bleeds, dependence on and side effects from pain medications, inability to participate fully in sports and activities due to physical limitations, many school absences, and concerns over the costs of medications.” – Thomas’ Story
“He bleeds frequently. He now is confined to a wheelchair due to the joint damage from repeated bleeding in his knees. He has had several major surgeries to stop bleeding in his joints and to try to relieve his pain.” – Matthew’s Story

“Matt graduated from high school with good grades, and he is now in college. He has a girlfriend, he drives a car, and he has a job. He has coped amazingly well. He is a very intelligent, funny, and talented young man.” – Matthew’s Story