A CDC study published in the Journal of Women’s Health found that, from 2006-2016, daily multivitamin use among women of reproductive age in the United States declined.

Taking a multivitamin every day is one way women can get 400 micrograms (mcg) of folic acid. In addition to consuming food rich with folate from a varied diet, getting 400 mcg of folic acid can help to reduce the chance of having a baby with a serious birth defect of the brain (anencephaly) or spine (spina bifida). These types of birth defects occur very early during pregnancy, often before a woman knows she is pregnant. Every woman of reproductive age needs to get the recommended dose of folic acid each day, whether or not she is planning to get pregnant.

You can read the scientific summary of the article here. 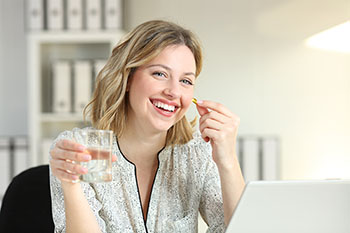 In general, women aged 18-24 years reported the lowest daily multivitamin use, compared with women in the other age groups.

CDC urges all women of reproductive age to take 400 mcg of folic acid each day, in addition to consuming food with folate from a varied diet, to help prevent some major birth defects of the baby’s brain (anencephaly) and spine (spina bifida).

Women can get the recommended daily dose of folic acid by

When taking folic acid, a higher dose than 400 mcg of folic acid each day is not necessarily better to prevent some types of birth defects, unless a doctor recommends taking more due to other health conditions.

Learn more about what CDC is doing around folic acid.

Give your vitamin intake a boost by enjoying this healthy smoothie!