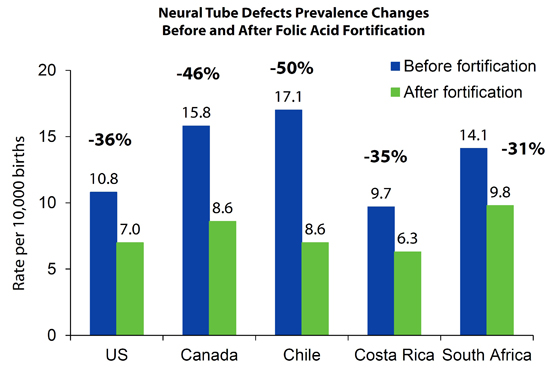 Key Findings: Assessing the Association between Natural Food Folate Intake and Blood Folate Concentrations
The journal Nutrients has published a new study that assessed the relationship between the amount of natural food folate consumed by women and their blood folate concentrations.
(Published April, 2015)

Key Findings: Blood Folate Concentrations and Risk of Neural Tube Defect-Affected Pregnancies: Where Does the United States Stand?
Birth Defects Research Part A has published a new study that looked at the amount of folate in the blood (“blood folate concentrations”) among women in the United States in relation to their risk of having a baby affected by a neural tube defect.
(Published April, 2015)

Key Findings: Population Red Blood Cell Folate Concentrations for the Prevention of Neural Tube Defects
This study describes the relationship between women’s blood folate concentrations and the risk of having a baby affected by a neural tube defect.
(Published July, 2014)