Henry’s story-Written by his mom, Erin 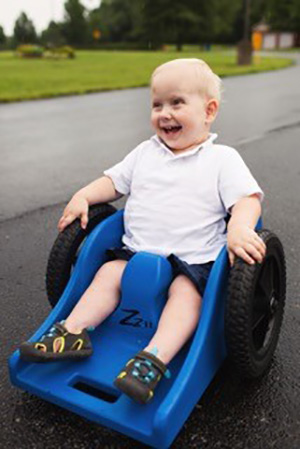 Living with a birth defect can be a challenge, but it doesn’t define one’s life. That is certainly true for Henry, who was born with spina bifida. As his mother, Erin, says, “spina bifida is what Henry has—it will never define who he is.” Read about Henry’s unwavering spirit and fun-loving personality below.

On October 25, 2012 we heard the words “spina bifida” for the first time related to our unborn son, Henry. A doctor began to lay out all the things that Henry would never be. We were told he would never walk, he would never go to a “real school,” he wouldn’t be a normal kid. They told us that as a result of having spina bifida, his life would be hard, and he would likely suffer because of it.

We had no idea what to expect. We had never met anyone with spina bifida, so we did exactly what you are not supposed to do—we googled it. That’s when we found the Spina Bifida Association of Kentucky. They invited us to a play group, and we met kids with spina bifida. The kids were doing all the things that, just a few weeks earlier, doctors said Henry would never do. We learned a lot about Henry that day. Even though we hadn’t met him yet, we learned that spina bifida is what Henry has – it will never define who he is.

Henry has proven doctors wrong time and time again. He isn’t walking yet, but he gets closer every day with lots of practice and the help of an amazing therapy team. But Henry has shown us that life isn’t lived only by those who are able to walk. He has shown us with unwavering spirit and determination that if you want something, you go get it, and you use what you have to get there.

Henry is probably the happiest person I have ever met. Through every surgery or medical test, he braces life with a smile as wide as Texas. He does all the things “normal” children do. He loves macaroni and cheese. He is always up for a ride in the wagon. His favorite color is yellow, and he laughs hysterically when he sees someone fall! He loves exploring the world around him in his ZipZac, and he can zip that thing around faster than I can walk sometimes.

Yes, Henry has spina bifida, but it’s never going to be the coolest thing about him. He is able to live a life full of smiles, adventures, the very best giggles, and the ability to adapt where he needs to.