Eli’s Story—Written by his mom, Jodie 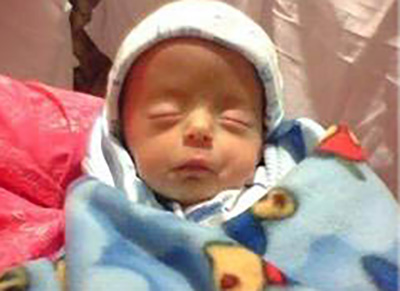 Jodie shares the story of her son Eli, who was born with spina bifida.  Upon Eli’s birth, Jodie and her husband learned that he had further health problems, causing him to be on life support.  Although Eli was only alive for a short time, he has given his family a lifetime of peace.  Read his special story below.

After four years of marriage, we thought we had it all figured out. We had finished college, bought a new home, and we began to start our family. But due to reasons unknown, that served to be quite the challenge for us. Our first pregnancy resulted in painful miscarriage. Then we experienced fertility problems. We assumed adoption would be our fate.

With our last fertility treatment, we achieved success! Several weeks later, our doctor found two healthy beating hearts on the ultrasound screen. However, complications arose very quickly. About midway through, we were given devastating news. We were told that we were having twin boys, but that Twin A had been diagnosed with spina bifida, a neural tube defect. We left our doctor’s office in shock. But after a few days, we began to prepare a place for a special needs twin and his healthy brother. On August 3rd we delivered: Elijah “Eli” Cole 6lbs 3oz & Walker Daniel 5lb 7oz.

As planned, Eli (Twin A) was rushed to the local children’s hospital upon birth for observation by their Spina Bifida Team, and Walker remained with me. Eli’s MRI results were worse than we thought, and he had multiple problems associated with his spina bifida. We learned that if he survived, our baby would never know how to eat, how to speak, or how to breathe on his own for the rest of his life. He would never know us, his parents. We immediately felt a rush of strength that God was preparing us for what was to come. We met with an organ donation organization so Eli might be able to give the gift of life. A representative informed us that Eli’s heart valves could save possibly two other babies. We planned the removal of his ventilator and prepared our entire family to say their goodbyes.

On August 6th, we watched as his ventilator & monitor wires were removed. We were told to only expect minutes with him. But against all odds, Eli kept breathing for fourteen hours. Our doctors encouraged us to transport Eli from the local children’s hospital to the hospital where his twin brother was so that they could be together. Once Eli’s hand was placed onto Walker’s little body, Eli’s color began to return and a slight smirk came across his face. We saw proof of the power of twins. And for the first time, we were finally able to enjoy our Eli, celebrate his life, and mourn peacefully, as a family.

Eli passed away in our arms later that evening, after an amazing 31 hours after his ventilator was removed. Those 31 hours gave us a lifetime of peace. Throughout this journey, we witnessed unbelievable strength, compassion, and the good deeds of friends, family, and medical personnel. We cherish each day we have with Walker and remain in constant awe of God’s plan for our lives.

On August 8th of this year, as we were mourning the 1-year anniversary of Eli’s death that day, we found out we are expecting again. We found out that this miracle baby is a baby girl, whom we have named “Ellie”.