Living with Other Types of Congenital Heart Defects, Piper 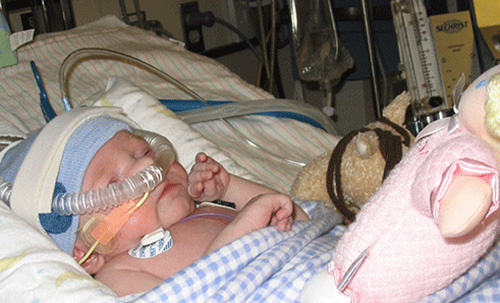 David’s daughter, Piper, was diagnosed with a congenital heart defect (CHD) shortly after she was born. Read below about Piper’s first few weeks of life and how David and his family support CHD awareness.

Piper, our first child, was born on Independence Day. I’m very patriotic, so I remember thinking what a great symbol this July 4th baby was going to be. My wife, Jennifer, had a healthy pregnancy with no problems during the delivery. Then, everything changed.

Piper was born blue. The doctor thought she just needed some oxygen, so we relaxed thinking this was a fairly normal situation. However, after two hours passed without seeing or holding our child, we began to wonder if something was really wrong. When the doctor finally returned, he said her oxygen levels were not getting better. He was worried about her heart, but the hospital didn’t have the right equipment to run the tests to check her heart. So, we had to send Piper by ambulance to the major children’s hospital in our state. Along with Piper, I left Jennifer in the early evening on what seemed like the longest ambulance ride in history—not because we were going slow, but because our world was flipped upside-down.

At the children’s hospital, the doctors were able to diagnose Piper with (TGA) and several large ventricular septal defects (VSDs). TGA is a type of heart defect where the two main blood vessels leading out of the heart are switched in position. And VSDs are holes in the wall that separates the lower chambers of the heart. Bottom line, Piper required open heart surgery to live.

In the meantime, Jennifer was still at the first hospital, in absolute shock. Who wouldn’t be? It’s very scary. You’re having a baby, there’s something wrong, and you’re away from your spouse. She was finally able to check herself out and arrived at the children’s hospital in the middle of the night. We slept on the loveseat of the waiting room that first night—the first of what would become a stressful and sleep-deprived several weeks.

At the time, I didn’t think that Piper was going to make it. Her surgery took a grueling 14 hours. Afterwards, Piper’s tiny body began to swell. The doctors needed to open her chest to relieve the swelling. Piper was unrecognizable—attached to what seemed like hundreds of tubes and cords.

We spent several weeks at the hospital. We showered and ate in the hospital every day, worrying constantly. “What are we going to do?” “What does this mean?”

At one point, Piper caught two infections that required her to be in an isolation room for several weeks. We had seen many sick babies go into isolation rooms, and most did not survive. That moment was my breaking point. I tried to stay strong throughout the process and be strong for Jennifer. But at that point, I broke. Two days later, though, our prayers were answered. Piper started to turn around. During this entire time, Jennifer didn’t get to hold Piper. It’s an incredibly tough and heartbreaking situation to live through. But, about six weeks later, Piper had improved enough for us to take her home.

As I started researching about CHDs, I realized that they are chronic, lifelong conditions. It was really difficult to come to grips with that. I had no clue what questions to ask or where to go for information. As my curiosity turned into action, I partnered with another parent of a child with a CHD, and we established an organization devoted to children with CHDs.

There are still a lot of unknowns about CHDs. Every parent has questions about what to expect, who to turn to, and what the future holds. Patients like Piper have a powerful voice, and together, we can greatly increase public awareness of CHDs and those living with these conditions.