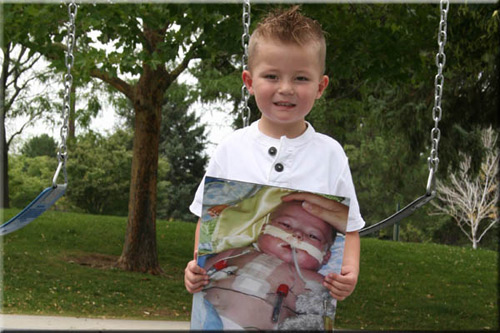 Teagan was born with a critical congenital heart defect (CCHD).  His mom shares her experience of how during the first year of life she focused on keeping Teagan alive. Read his inspiring story below.

It is not the life I dreamed of while he grew in my belly for nine months, but it is my life nonetheless. Teagan’s first year was the hardest year of my life to date. He had his first of three planned open heart surgeries at seven days of age. We stayed at the hospital for eight weeks. When I finally brought him home again he was very fragile, on several medications, needed shots twice a day, was on oxygen, and had a feeding tube. We were home for a few months and by the end of July 2008, he was in desperate need of his second planned open heart surgery and some other procedures. We had a six week hospital stay this time and returned home shortly after his five month birthday. Our days were full of medications and tube feeds, oxygen saturation checks, lots of doctors, home health care specialists, and Early Intervention. We had to do all we could to stay healthy, so we had to miss out on a lot of family functions and stayed home a lot. Slowly but surely, I got used to my new normal and life as a Heart Mom.

Today Teagan likes to tell people, “My heart is happy and strong!” He goes to preschool, loves to play with (healthy) friends, wrestle with his big brother, play super heroes, watch his shows, sing the current hits, swim, go on family vacations and ride his scooter. We are currently waiting for his heart to need a third planned open heart surgery, and we anticipate an eventual need of a full heart transplant. Teagan is currently on three medications a day. He is fed through his g-tube twice a day and the rest of his food he eats by mouth. We still try really hard to not get sick and we are extra aware of the germs around us. Teagan’s first year of life was about keeping him alive, and now it’s about letting him live! I feel so blessed to be the mother of such an incredible boy, he is truly a miracle! My life is richer than I ever could have dreamed of since the day I became a Heart Mom!