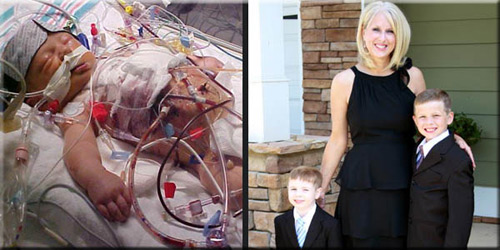 Laura shares the story of her son, Ryan, who was born with a critical congenital heart defect (critical CHD). Ryan’s CCHD went undetected for the first 24 hours of his life, but fortunately was discovered in time for immediate treatment. Although Ryan had a rough start, he has grown into a happy, thriving boy. Read his story below.

The night after my son, Ryan, was born, I felt like something wasn’t right. He did not cry. He had a hard time feeding. He felt cold. When the pediatrician found nothing wrong and cleared him to go home, I had an uneasy feeling. But it wasn’t until that first night home, when his legs were bluish in color and his breathing was labored, that we knew for sure that something was wrong. We called the paramedics, and when we got to the hospital, the doctors recognized that something was wrong with his heart. After some more testing, the doctor came in and very bluntly told us that our beautiful son had a very grave heart condition called hypoplastic left heart syndrome. Without immediate intervention, he would die. Suddenly, the room was swirling, and I crumpled to the floor. All I could think about was how our older son might not see his little brother again.

Since that day, Ryan has had a number of surgeries, his first one at only five days old. He slowly got better, but at two years old, he took a turn for the worse, and we decided to put him on the heart transplant list. While Ryan was in the intensive care unit (ICU) getting more and more sick, we finally heard the doctor say those magic words, “We have a potential heart.” On the day of his transplant, my husband happened to get in the elevator with the man transporting the heart. All he could muster to say was “Take care of my son’s heart.”

Ryan has grown up and is doing awesome. He is such a blessing to our family—we cherish every day with him. It hasn’t been easy. There have been many challenges, like getting insurance to help with all the bills and getting Ryan the support he needs to reach his milestones. But I would not change a thing. I want the world for him. I want him to be able to do whatever he wants. And, he does. He wakes up every day, the happiest kid with no fear.