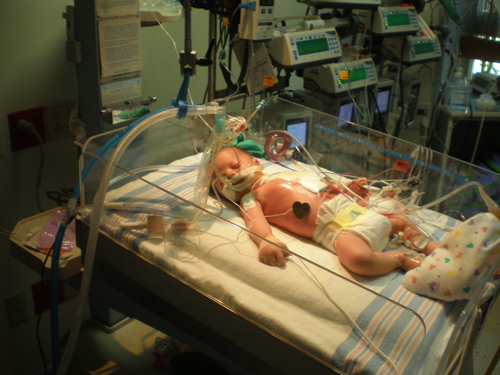 A birth defect diagnosis during pregnancy can challenge any family. Dawn’s son, Caden, was diagnosed with a heart defect during her pregnancy. Read below to see how she approached her pregnancy after the diagnosis and her advice for other parents.

My son, Caden, was born with hypoplastic left heart syndrome, a type of congenital heart defect (CHD). After two previous normal pregnancies, I was shocked to receive this diagnosis during my 20th week of pregnancy with Caden. I have to admit, receiving the diagnosis during pregnancy was both a blessing and a curse. It robbed me of any sort of normal pregnancy. After the diagnosis, we grieved a lot. Everything we had in our minds about this pregnancy went away. We had to prepare for a whole new pregnancy. Everything became about the baby. We had so many ultrasounds and tests to check the baby’s heart.

That said, the diagnosis helped me prepare for what we needed to do. We researched what the defect was and what the prognosis would be. We tried to get all the best doctors on our case right from the beginning. We were also able to prepare our other children—we had to tell them that their sibling would not be coming home from the hospital right away. Our older son understood the seriousness of what my husband and I were saying, but my younger daughter didn’t quite get it. She just knew the baby was sick.

After the diagnosis, we chose not find out the sex of the baby. We were worried that with more information about the baby, we would start bonding. We thought it might be more difficult for our children if anything happened to Caden. More than that though, I wanted one moment that was a normal pregnancy. No matter what happened, the one thing that they couldn’t take away from me was the moment where they lifted the baby over the curtain and said “It’s a boy!” I wanted that moment to be about our family, about Caden, and not about the CHD.

I remember the first time my other children saw Caden after he was born. When my older son came into the room, he didn’t see any tubes. He didn’t see any bandages. He just saw his little brother. It was such a sweet moment. I think it was a Top 5 moment in my life. 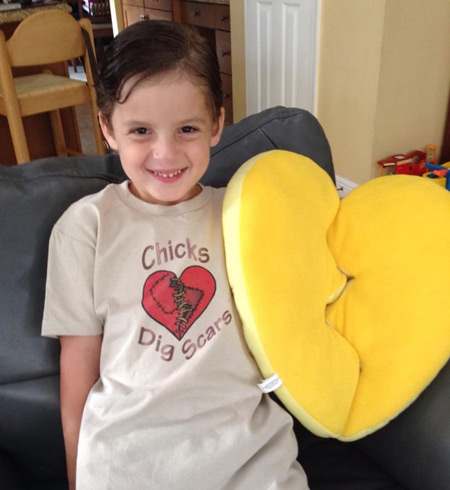 Caden has had to undergo three open-heart surgeries since birth and spent a lot of time in the hospital, but he is doing really well now. He loves soccer, has traveled to six countries, and he’s a crazy, rowdy child who tested gifted in school. In the end, I wanted to share Caden’s story to help give other CHD parents hope. It’s a scary diagnosis, but so much of your baby’s success is your own attitude and how you approach the challenges. I remember when I was pregnant, I only saw one positive success story—one article where the baby was clapping and looked happy and healthy. It was a story about survival. I clipped it out, and it still resides in Caden’s baby book. Don’t lose sight of that hope.

I also wanted to share his story to help raise awareness of CHD. Caden may look normal and play soccer like any other child. But, at any point, the other shoe could drop. Regardless of what he looks like on the outside, he only has half a heart working for him on the inside. And that’s why research is so important. If not for the research that’s been done, Caden wouldn’t even have a story. He wouldn’t be here with us today.

Caden has taught us lessons that we might never have learned otherwise. He taught us a different way of looking at the world. He’s a picture of inspiration for many people. Most importantly, he is a thriving little boy – one who is not defined by his heart diagnosis.