Living with Other Types of Congenital Heart Defects, Hannah 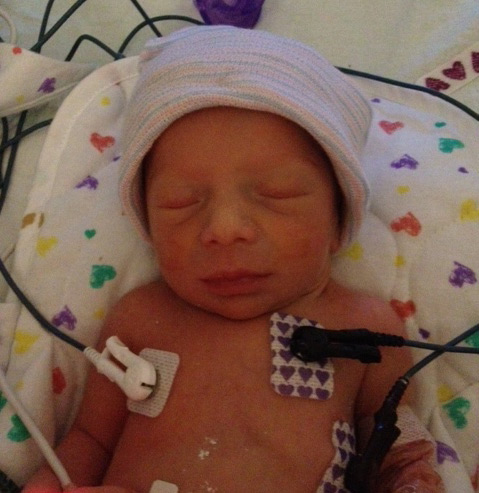 Hannah was born with several critical congenital heart defects. Hannah’s family is forever grateful for the three weeks they were able to spend with her before she passed. Read their special story of Hannah below.

My husband, Nick, and I were ecstatic when we learned that we were pregnant with our first child last February. The excitement grew when we found out that we were having identical twins, but it was short lived. The doctors diagnosed our girls as Monoamniotic-Monochorionic, or “mono mono,” meaning they shared the same sac with no dividing membrane and the same placenta. This type of pregnancy is extremely rare and very high risk, due to cord entanglement issues. We were given a poor prognosis and told that 80 percent of people in our situation would terminate the pregnancy. Nick and I plunged forward, hoping and praying for the best for our babies.

Unfortunately the stress did not end there. At five months of pregnancy one of our girls, Hannah, was diagnosed with heterotaxy syndrome causing several complex congenital heart defects, two of which were known as total anomalous pulmonary venous return (TAPVR) and pulmonary atresia. We began seeing a pediatric cardiologist who informed us that Hannah’s condition was very precarious and would require a series of three open heart surgeries over the course of the first five years of life, the first of which would most likely be performed the day of birth. To complicate matters, Hannah would be premature and underweight, as she and Elizabeth had to be delivered via C-section at 32 weeks gestation in order to increase their chance of survival due to their “mono mono” diagnosis. As a result, I had to spend the last two months of my pregnancy on the bed rest at the hospital for daily fetal monitoring.

Hannah and Elizabeth were born at three pounds nine ounces and three pounds fifteen ounces, respectively. They were immediately whisked away and after hours of echocardiograms, it was determined that it was in Hannah’s best interest to prolong surgery for several weeks in order to let her gain weight and increase the chance of a successful surgery. Nick and I were cautiously optimistic but painfully aware that a favorable outcome was not guaranteed.

Just three weeks later, Hannah underwent open heart surgery. After almost 12 hours of anguished waiting, we were told that the surgery had been a success but that the next 48 to 72 hours were critical. Literally as we were preparing to leave the hospital to go home that same night, Hannah’s heart stopped beating. The doctors were able to revive her and aggressively monitored her condition overnight.

Early the next morning, Hannah passed in our arms. Her surgeon assured us that we had done everything possible to save her but unfortunately her lungs could not support her heart condition. We are saddened beyond belief at our loss, but we believe Hannah is in a better place and we are comforted that she is no longer in pain or suffering. She was a fighter until the end and we will forever be grateful for the three weeks we were able to spend with our little angel.