Stories: Living with Coarctation of the Aorta 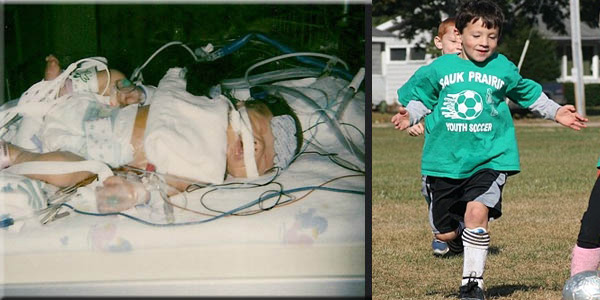 Nicholas was born with a critical congenital heart defect (critical CHD) called coarctation of the aorta. Read his inspirational story below about the hardships he faced early in life, but how he is now a poster child for successful heart surgery.

“Are you sitting down? Your baby has a serious heart defect.” This phone call was supposed to be my mother, congratulating us as we brought our baby home for the first time. Instead, it marked the beginning of a whirlwind, which resulted in three hospitals, a helicopter ride and heart surgery, all in the first four days of Nicholas’ life. Nicholas was born with a serious heart defect called critical coarctation of the aorta, a severe narrowing in his aorta cutting off blood flow to the lower half of his body.

The first couple of years of Nick’s life were filled with caution, fear and anxiety, and they were consumed by doctors’ visits. This was compounded by the fact that there were always two other siblings in tow. The inside of my minivan was decorated with the hundreds of “good patient” stickers the three of them had collected. These stickers meant Nicholas had made it another day.

Truthfully, Nicholas is a poster child for successful surgery. He has done so well that the doctors’ visits have tapered off to a bi-annual cardiology visit. He is able to participate in sports with soccer and swimming topping his list, although hip-hop dancing is his favorite. Most days, it’s easy to forget that he has a serious defect. Yet, occasionally, I catch myself wondering what his future holds. Until recently, children with severe heart defects didn’t survive and there is a huge gap of information about adults with heart defects.

There are still questions: How? Why? What’s next? No one really knows. I do know, that I will do everything I can to make sure he lives a long and healthy life.

Shandler was born with a critical congenital heart defect (CCHD). His mother shares the family’s story about how Shandler beat all odds against him for survival. Today, Shandler is a happy, energetic boy. Read his full story below.

Our twins, a boy and girl, were born six weeks premature in 2002. Our son, Shandler, was born with two congenital heart defects: coarctation of the aorta and bicuspid aortic valve. Coarctation of the aorta is a narrowing of part of the aorta (the major artery that supplies oxygenated blood to the entire body). Bicuspid aortic valve is an aortic valve that has two leaflets, instead of three. Shandler was fairly small, weighing only 4 pounds. At four days old, he began to have difficulty breathing. The doctors detected a heart murmur, and diminished pulses in his legs and feet. Through echocardiography (ultrasound of the heart), the congenital heart defects were found. Three days later, the heart surgeon repaired the coarctation. There is no intervention for his bicuspid aortic valve.

Our family was absolutely terrified that he wouldn’t survive major heart surgery because of how tiny he was. He did well for about two weeks after surgery, and then he developed complications (a risk with any surgical procedure). Fluid collected around his lungs, making it difficult for him to breathe. He required a ventilator to assist with breathing and chest tubes placed to drain the fluid. After six weeks of no improvement in his condition, as well as developing bacterial meningitis (which almost took his life), he was taken back into surgery. Within 24 hours, he was able to breathe on his own again. After 11 weeks in the newborn intensive care unit, Shandler was finally able to come home, to be reunited with his twin sister and live with our family. However, he was discharged with a feeding tube. This was necessary because his heart condition caused fatigue during feedings, and he was not able to take the full amount necessary by mouth.

Shortly after coming home, Shandler developed a condition called dysphagia, due to severe acid reflux. Dysphagia is a problem with swallowing. Shandler started refusing to eat. He later had a feeding tube surgically placed, which was how he received his nutrition for several years. Just before turning four, he was finally eating and drinking enough to have the tube removed.

His heart condition made him extremely fragile the first few years of life. As an infant, he was hospitalized for several weeks (in critical condition) in the pediatric intensive care unit, with complications from flu. At age two, he contracted respiratory syncytial virus (RSV) and was hospitalized for 1 week due to breathing difficulty.

Seeing Shandler today, you wouldn’t know he had such a rough start in life. Although he is small for his age, he is able to run and play with his peers, and eats everything in sight!! However, he does require yearly follow-up by a cardiologist, a heart doctor. Through echocardiography, they look for any signs of aortic narrowing again, as well as checking the function of his bicuspid aortic valve. Complications of bicuspid aortic valve include: congestive heart failure, leakage of blood through the valve back into the heart, and narrowing of the valve’s opening. The valve will require repair or replacement if this occurs. Shandler is never allowed to participate in contact sports (football, hockey and wrestling). Despite this restriction, he is a bright, happy boy, who loves to play jokes on others (especially his sisters). He enjoys building things, reading Harry Potter books, and is a whiz in math and other school subjects. He will always have his “battle scar”, although he jokes that it “makes him look tough”!! We have been truly blessed to have Shandler in our family.