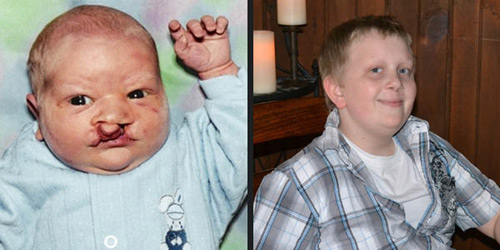 Michele and her son Cade, who was born with cleft lip and cleft palate, share Cade’s story. Cade has learned to define his disability, not let it define him, and to use it to help others by telling his story.

My son Cade was born April of 2000 with a severe case of cleft lip and palate. I didn’t learn about Cade’s cleft during my pregnancy, and after his birth, I had a lot to absorb and learn very quickly. Even though at first we were devastated and scared, my husband and I immediately embraced the challenges we knew we faced, and we were just as proud of our new son as if he had been born without a birth defect. We knew that God had given Cade to us for a reason, and we spent the first few months of Cade’s life educating ourselves about his condition and things we could do to make Cade’s life as normal as possible. Although there were things we had to do differently, we tried very hard to treat Cade as though there was nothing different about him. Before his first corrective surgery, we proudly showed him off, took pictures of him, and sent him to daycare as though there was nothing different about him. We focused on educating everyone we came in contact with, rather than sheltering him at home.

When Cade began school, sometimes the other children would tease him. As much as it broke my heart when he was bullied, we explained that everyone gets made fun of and that we all have insecurities. We asked our family and close friends to share their own experiences and insecurities, and encouraged Cade to address his differences. When he was the star of the week in school, he would take in pictures from infancy and educate his classmates and teachers about his condition. Before each surgery, I would join him at school to talk about the surgery in front of his class. As a result, the other children became supportive and protective of Cade, rather than teasing him, once they knew more about what he was going through.

Today, Cade has had five reconstructive surgeries, five sets of ear tubes, and has many more surgeries to come. I admire Cade for his determination, confidence, and his caring and outgoing personality. He has learned to define his disability, not let it define him, and to use it to help others by telling his story.

God has made me this way for a reason, and I feel his reason was for me to help show other kids and adults that it’s ok to have a disability. It shouldn’t hold you back. It has never stopped me from doing anything. Sure there are things I don’t like about myself, but overall I am happy with the way I look. My goals are to continue to make people feel better about themselves and strive to become a professional baseball player. If I had message it would be to say “look at me, not my disability!” God made you this way for a reason too, you have a gift not a disability so hold your head high and go for your dreams.