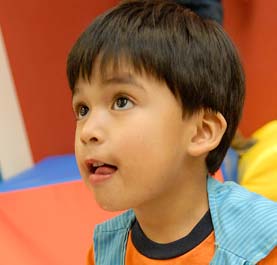 Billy is a 3 1/2 year-old boy you are seeing for the first time in your resident practice. He was born full term following a normal pregnancy and delivery. His newborn screen and neonatal hearing test were normal.At 18 months he underwent bilateral myringotomy tube placement following repeated bouts of otitis media. His mother also had concerns that he was not speaking any words. His doctor had said, “Let’s wait and see.”

A follow-up appointment was scheduled for when he turned 2. At his 2-year well-child check, because of his history of global developmental delay, he was referred to early intervention (EI) services.

Three months ago, Billy began attending a specialized preschool in the local school district; there, he receives speech, physical, and occupational therapies.

This is the third preschool Billy has attended. He was asked to leave his previous schools because of behavioral problems.

Billy’s mother reports his current preschool teacher recommended she take him to the pediatrician given concerns about his behavior.

Since he began preschool, his teachers have reported he is extremely hyperactive, does not follow directions, and largely ignores the children in the class. 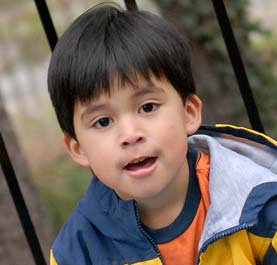 Billy’s mother reports he has been in good health recently. She tells you all of his milestones were delayed, particularly his language. She denies any history of developmental regression. She adds that Billy has made some nice progress since he began receiving EI services. He will now use single words like “juice” and “cookie” to make requests.

At home, Billy is a “handful,” but will usually calm down when she turns on his favorite cartoon. She describes him as a sweet and loving boy but reports prolonged tantrums when denied what he wants. Tantrums will often occur when they are attempting to leave their house. During these tantrums, he will frequently bang his head and bite his hand, which frightens her.

For some time now she has been concerned that Billy does not like to play with his similar-aged cousins during family get-togethers, but she thought this was because he was an only child and didn’t like to share. She had been eagerly awaiting his first day of preschool so he could spend more time around other children.

When asked about family history, Billy’s mother reports her sister’s 7-year-old son is in special education, but she is not sure what kind of evaluation has been done as her sister “does not like to talk about these kinds of things.” She mentions it has been hard for the family, and she finds Billy’s preschool reports to be embarrassing and discouraging. She is frustrated and wants the best for Billy.