Cutting-edge technology is available now that can test newborns for more diseases than has ever been possible. CDC is working to harness the latest advances in science and technology so that more disorders can be detected accurately and treated quickly. In 2005,CDC established the Newborn Screening Translation Research Initiative (NSTRI) with the CDC Foundation. Working with corporate, academic, and Foundation partners,NSTRIexternal icon assures the quality of research methods during both pilot studies and routine screening. Goals for NSTRI include:

NSTRI has developed laboratory projects focusing on a variety of disorders, including lysosomal storage disorders (LSD) and severe combined immune deficiency (SCID). In 2008, CDC supported three pilot studies for SCID, including one involving the Indian Health Service and the Western Navajo Reservation in Arizona. By 2018, CDC anticipates that it will collaborate on, support, or fund 15 pilot projects for conditions such as Pompe disease, Krabbe disease, Fabry disease, Niemann-Pick, metachromatic leukodystrophy (MLD), DiGeorges disease, and X-linked adrenoleukodystrophy (X-ALD).

In 1996, Micki Gartzke gave birth to a daughter named LeA. As a newborn, LeA ate and slept like all other newborns and began to notice the world around her. Within a few months, LeA’s physical condition changed dramatically. Her body became rigid. She cried constantly, and she would not eat. At 10 months, LeA was diagnosed with Krabbe disease, which is part of a group of approximately 40 rare diseases known as lysosomal storage disorders (LSDs). LSDs are caused by deficient enzymes that normally eliminate unwanted substances in the cells of the body(6).

Because the diagnosis took months, LeA was past the period when she could receive treatment. Her physical condition worsened to where she needed feeding tubes, specialty formulas, 36 doses of medicine a day, oxygen, suctioning, and in-house nursing. After a quarter of a million dollars worth of medical bills, LeA died at the age of two. Her mother says that early diagnosis and intervention could have made the difference in LeA’s life, and for this reason, Micki Gartzke became a strong advocate for newborn screening. Today, she works with foundations, researchers, corporations, and legislators to raise awareness about the importance of screening.

One state—New York—now screens for Krabbe disease, and CDC plans to provide the reagents that can be used to perform the Krabbe tests. In addition, CDC has established a program to ensure that the Krabbe test results are accurate. Illinois has passed legislation mandating newborn screening for Krabbe and four other LSDs (Pompe, Fabry, Niemann-Pick, and Gaucher diseases). CDC will provide the reagents and will assure the quality of all five tests.

Jeffrey Modell was a sweet, cheerful, outgoing kid. He was like every other boy his age, except he got sick very often. His life was filled with normal, happy times, but was frequently disrupted with sudden high fevers, bronchitis, sinusitis and other infections that led to extended periods on medication and lengthy hospital stays. Plans for fun activities were made in spite of the strong possibility that Jeffrey might be too sick to attend. Even periods of good health were strained with the ever-present threat of sudden illness caused by Jeffrey’s immune deficiency. Three decades ago, no one knew very much about primary immune deficiencies. They were considered so rare, that many doctors knew too little about them and had even fewer treatment options. Lay people had never heard of these disorders, and primary immune deficiencies were not at the top of many research agendas.

At 15, Jeffrey’s condition overwhelmed him and took his life. Inspired by Jeffrey’s courage and optimism, his parents, Fred and Vicki Modell, started a Foundation to raise awareness about primary immune deficiencies, including severe combined immune deficiency (SCID). Sometimes known as “Bubble Boy Disease,” SCID is characterized by an inability to resist infections. Without early diagnosis and treatment, babies with SCID usually die within a year of birth. Newborns with SCID do not generally exhibit signs of infection or illness because during the first few weeks after birth, they are protected by the antibodies passed on to them from their mothers and because they have not yet been exposed to infection. Newborn screening enables diagnosis and treatment before the onset of infection and related medical complications; early detection also improves health outcomes and helps reduce hospitalizations(7).

The Modells recognize that having an accurate test leads to an early diagnosis and the best opportunity for effective treatment. Before newborn screening for SCID can be implemented at the state level, an effective and efficient screening method (that could process hundreds of samples daily) is needed(7). With Congressional funding, CDC is addressing this need through cooperative agreements that encourage states to research, develop, and evaluate newborn blood spot screening tests for SCID. 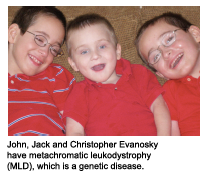 Bob and Sonya Evanosky know the benefits of early diagnosis and intervention. Both of their twin boys, John and Christopher, were premature babies when they were born in 2001, and so it was not surprising to their parents that they met growth and development milestones more slowly than their peers. At 15 months of age, the twins were struggling to walk. This is when the Evanoskys’ difficult search for answers began. After a battery of tests, John and Christopher were diagnosed with cerebral palsy. The twins began therapy for cerebral palsy; however, they soon began to lose the ability to walk, their speech worsened, and they were struggling to eat. The twins were eventually diagnosed with metachromatic leukodystrophy (MLD), an LSD.

Although there is no cure for MLD, experimental treatment involving bone marrow transplant or cord blood stem cell transplant can delay the progression of the disease in infants without significant symptoms(8). John and Christopher were not candidates for treatment because they showed significant symptoms. The Evanoskys’ youngest child Jack tested positive for MLD one month after the twins, and because he showed no symptoms, he underwent a stem cell transplant. Post-transplant, Jack is doing well, but unfortunately the future for John and Christopher is bleak.

The Evanoskys, through their Foundation, are working with CDC to develop newborn screening for MLD. This collaboration will also establish a dried blood spot card repository for conditions that are part of public health newborn screening programs as well as conditions that may be added in the future. This repository will help CDC enhance quality assurance by providing biologic reference materials for current and newly-implemented screening tests. Although their children cannot benefit from newborn screening for LSDs, the Evanoskys think that newborn screening is the best way to make sure that other children have a chance at a normal life. They recognize that ensuring the accuracy of the tests is critical and believe that families must have the health information they need to make informed decisions.