Newborn screening is one of the nation’s most successful public health programs (1). Newborn screening programs test babies for disorders that are often not apparent at birth. Such disorders may be inherited, infectious, or caused by a medical problem of the mother. If these disorders are not detected and treated soon after birth, they may cause mental retardation, severe illness, or premature death. More than 4 million newborns are screened annually in the United States, and thousands of infants are rescued from disability and death.

Newborn screening begins within 24 to 48 hours of a child’s birth when a few drops of blood are obtained from a heel stick. The blood spots are sent to a laboratory that is a part of the state or territorial public health department. The spots are analyzed by several different laboratory methods to test for biochemical and genetic markers that reveal hidden congenital (present at birth) disorders. If such markers are found, the newborn screening follow-up program notifies the parents and physicians so that the baby can receive immediate attention. Follow-up programs arrange for diagnostic tests to confirm the newborn screening results. Follow-up programs also refer the child to a treatment center to provide access to the essential medical services needed to minimize the effects of the underlying disorder. 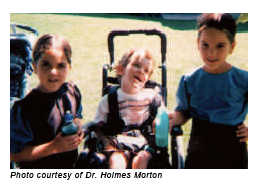 The three children in the photograph all have an inherited metabolic disorder called glutaric aciduria type I, which occurs when the body is unable to degrade certain amino acids (the building blocks of proteins) completely. Excessive levels of organic acids accumulate in the brain and cause degeneration in a region of the brain that controls movement (2). In the past, children with brain damage, like the boy in the picture, were often said to have cerebral palsy. He was born in a hospital where newborn screening for glutaric aciduria was not being done. The sisters (not his siblings) on each side of him were tested for glutaric aciduria as part of a regional newborn screening program to develop new methods to diagnose and treat the disorder. Early detection and intervention, which included a special diet and intravenous glucose treatments, prevented the sisters from becoming disabled. The different health outcomes for these children and reports about success in identifying and treating glutaric aciduria throughout the United States and Europe have led to widespread screening of newborns for this treatable disorder.