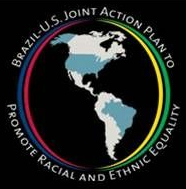 One example is OMHHE’s collaboration with Brazil as part of the U.S.-Brazil Joint Action Plan to Eliminate Racial and Ethnic Discrimination and Promote Equality (JAPER).

The United States and Brazil share a commitment to combat discrimination based on race, gender, ethnicity, or lesbian, gay, bisexual, and transgender (LGBT) status; to advance gender equality; to fight exploitative child and forced labor; and to promote human rightsexternal icon. The U.S.-Brazil Joint Action Plan to Eliminate Racial and Ethnic Discrimination and Promote Equality, a bilateral instrument that targets racial discrimination, provides a platform for cooperation to combat racial discrimination broadly, and to share best practices in tackling discrimination in education, law enforcement, labor, health, gender-based violence, economic empowerment, and many other areas.

What can public health practitioners in the U.S. and Brazil learn from each other about engaging communities in the development of national plans to reduce health disparities, paying particular attention to the role of racial and ethnic discrimination?

To examine this question, CDC and the Brazilian Ministry of Health are collaborating under the U.S. Department of State led U.S.-Brazil Joint Action Plan to Eliminate Racial and Ethnic Discrimination and Promote Equality (JAPER), a bi-national agreement signed in 2008.

In preparation for the 2014 JAPER Health Seminar, the HHS Office of Global Affairs (OGA) coordinated a meeting between Brazilian Ministry of Health representatives and the HHS Offices of Minority Health.

About the JAPER Health Seminar 2014

In February 2014 a JAPER Health Seminar was held in Brasilia, Brazil.

To further the JAPER health collaboration, a delegation from the U.S., including Dr. Nadine Gracia, HHS Deputy Assistant Secretary for Minority Health and Dr. Leandris Liburd, Director of OMHHE, met with representatives from the Brazil Ministry of Health, Brazilian public health scholars and service organizations as part of an international seminar on racism and health.

The seminar highlighted the need for specific binational actions to develop an agenda between both countries on racial and ethnic health disparities, and to highlight experiences in each country that can help both countries strengthen their disparities approaches.

The bulk of the volume is organized into four thematic parts:

The articles in this issue provide a roadmap for some of the needed research and interventions that can enable the field to fully understand and better implement comprehensive, multi-level solutions to improve the health of minority men.