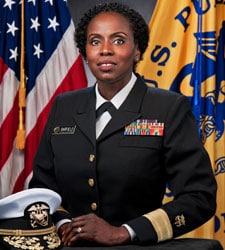 Wanda Barfield, MD, MPH, FAAP, is the Director of the Division of Reproductive Health (DRH) within the National Center for Chronic Disease Prevention and Health Promotion (NCCDPHP) at the Centers for Disease Control and Prevention (CDC). She also serves as Assistant Surgeon General (Rear Admiral) in the U.S. Public Health Service.

Dr. Barfield joined CDC in 2000 as part of its Epidemic Intelligence Service where she worked in neonatal and perinatal health, with a focus on racial disparities. In 2003, she was assigned to the Massachusetts Department of Public Health as a CDC Maternal and Child Health (MCH) Epidemiology Field Assignee where she focused on integrating public health and clinical services to improve regionalized perinatal systems of care. She returned to Atlanta in 2006 to become Senior Scientist and, later, Team Leader for the CDC Maternal and Child Health Epidemiology Program. She was named Division Director in 2010.

As DRH Director, Dr. Barfield has led efforts to provide optimal and equitable health to women, infants, and families through improved surveillance and applied public health research during the critical junctures of population health; pregnancy, infancy, and adolescence. She has built and strengthened numerous strategic partnerships with MCH organizations and led DRH in improving outcomes.

In addition to her role as Director of DRH, Dr. Barfield is also an Associate Professor of Pediatrics with the Uniformed Services University of the Health Sciences and an Adjunct Assistant Professor at Emory University School of Medicine.

She is a Fellow with the American Academy of Pediatrics (AAP) and is the CDC liaison to the AAP Section on Neonatal-Perinatal Medicine (SoNPM) and Committee on Fetus and Newborn (COFN). She continues to do clinical work in neonatology, providing care to critically ill newborns in Atlanta, Georgia.