Despite overall progress in reducing new infections among gay and bisexual men, the HIV epidemic continued and was more severe among Black or African American (hereafter referred to as Black) and Hispanic/Latino gay and bisexual men in the decade leading up to the federal Ending the HIV Epidemic in the U.S. (EHE) initiative, which the U.S. Department of Health and Human Services launched in 2019.

Unequal reach of HIV prevention and treatment, higher levels of HIV in some communities, and systemic inequities fuel these troubling trends.

HIV-related stigma—negative attitudes and beliefs about people with HIV—may also contribute to these disparities. In an analysis of data from the Medical Monitoring Project—a nationally representative survey of people diagnosed with HIV—Black and Hispanic/Latino gay and bisexual men were more likely to report experiencing HIV-related stigma than White gay and bisexual men.

With effective prevention and treatment tools at our disposal, the nation has a decades-in-the-making opportunity to end the domestic HIV epidemic and erase glaring disparities in HIV prevention and care. CDC is working with partners through the federal Ending the HIV Epidemic in the U.S. initiative to scale up key, science-based HIV treatment and prevention strategies in innovative ways that reach populations equitably. The goal is to reduce HIV infections by 90% by 2030. 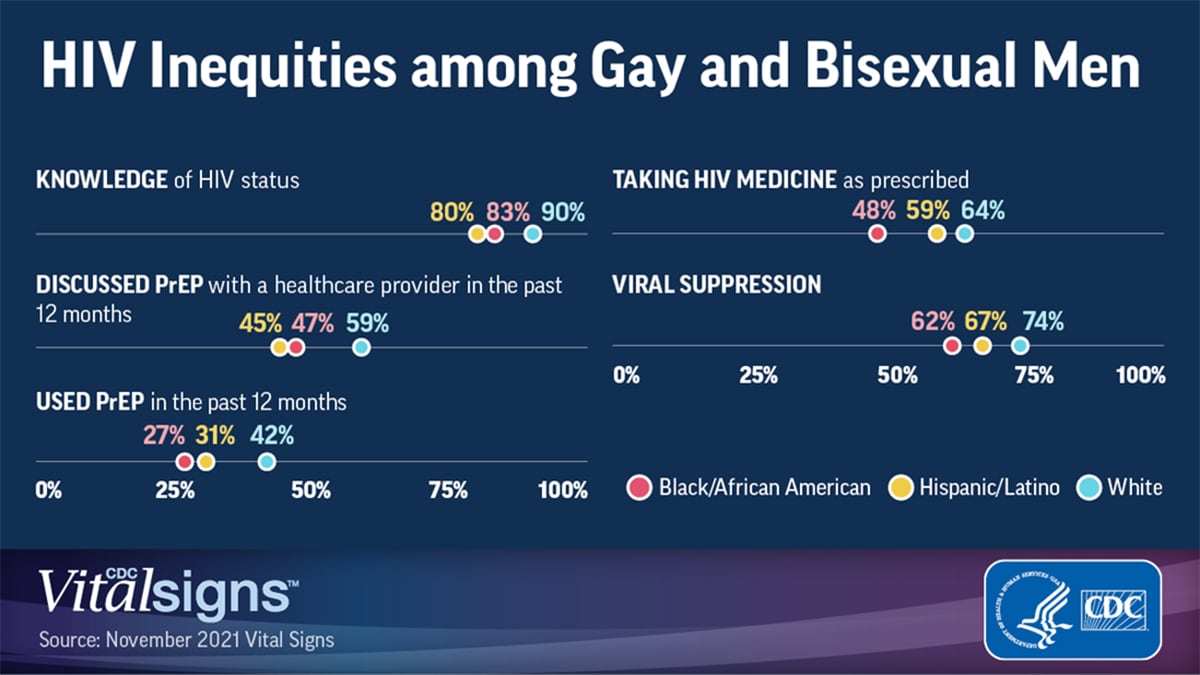 Throughout my career, I have witnessed a transformation for those living with and at risk for HIV,” said CDC Director Rochelle P. Walensky, M.D., M.P.H. “We have the scientific tools to end the HIV epidemic, however, to achieve this end we must acknowledge that inequities in access to care continue to exist and are an injustice. We must address the root causes of these ongoing disparities and make proven HIV prevention and treatment intervention available to all.

What can be done to address these inequities as we observe World AIDS Day?

Go to CDC.gov/VitalSigns for more information on the report, HIV.gov for more about the federal Ending the HIV Epidemic in the U.S. initiative, and CDC.gov/endHIV for more about CDC’s role.