Pregnancy-Related Deaths Happen Before, During, and Up to a Year After Delivery

3 in 5 pregnancy-related deaths could be prevented, no matter when they occur

Pregnancy-related deaths can occur up to a year after a woman gives birth – but whenever they occur, most of these deaths are preventable, according to a new CDC Vital Signs report.

The findings are the result of a CDC analysis of 2011-2015 national data on pregnancy mortality and of 2013-2017 detailed data from 13 state maternal mortality review committees. CDC defines pregnancy-related death as the death of a woman during pregnancy or within one year of the end of pregnancy from a pregnancy complication; a chain of events initiated by pregnancy; or the aggravation of an unrelated condition by the physiologic effects of pregnancy.

The data confirm persistent racial disparities: Black and American Indian/Alaska Native women were about three times as likely to die from a pregnancy-related cause as white women. However, the new analysis also found that most deaths were preventable, regardless of race or ethnicity.

“Ensuring quality care for mothers throughout their pregnancies and postpartum should be among our Nation’s highest priorities,” said CDC Director Robert R. Redfield, M.D. “Though most pregnancies progress safely, I urge the public health community to increase awareness with all expectant and new mothers about the signs of serious pregnancy complications and the need for preventative care that can and does save lives.”

Every pregnancy-related death reflects a web of missed opportunities

The committees determined that each pregnancy-related death was associated with several contributing factors, including access to appropriate and high-quality care, missed or delayed diagnoses, and lack of knowledge among patients and providers around warning signs. MMRC data suggest that the majority of deaths – regardless of when they occurred – could have been prevented by addressing these factors at multiple levels. 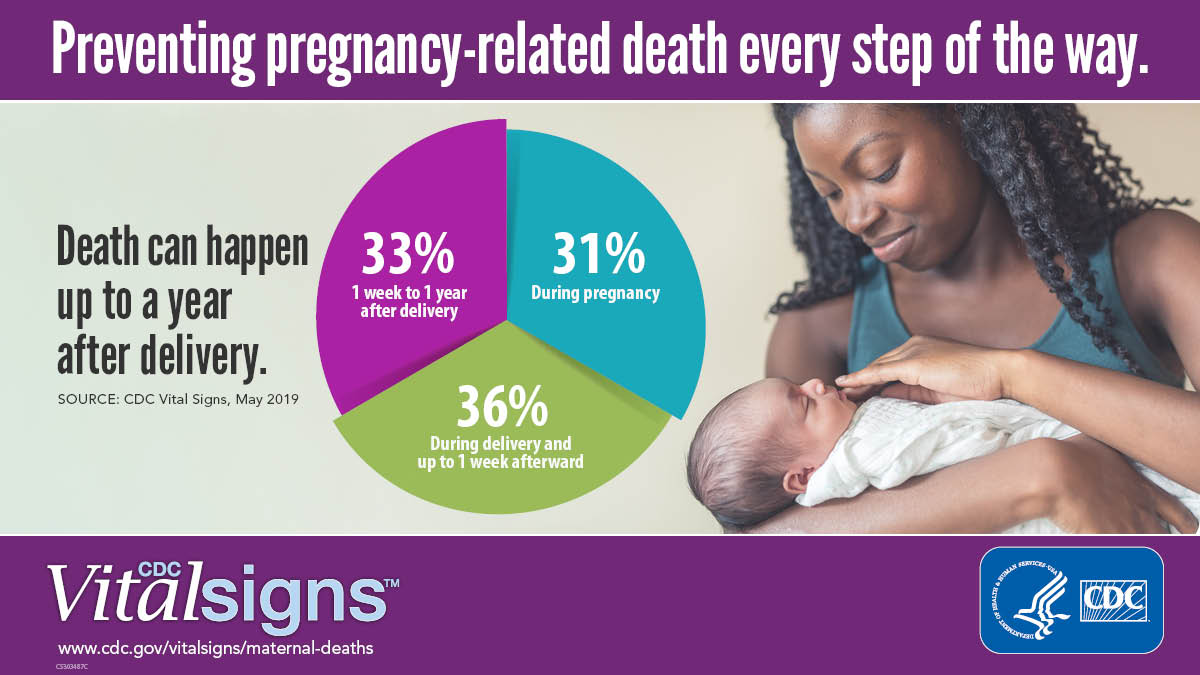 “Our new analysis underscores the need for access to quality services, risk awareness, and early diagnosis, but it also highlights opportunities for preventing future pregnancy-related deaths,” said Wanda Barfield, M.D., M.P.H., F.A.A.P., director of the Division of Reproductive Health in CDC’s National Center for Chronic Disease Prevention and Health Promotion. “By identifying and promptly responding to warning signs not just during pregnancy, but even up to a year after delivery, we can save lives.”

Working together to prevent maternal deaths

MMRC data demonstrate the need to address multiple contributing factors to prevent deaths during pregnancy, at labor and delivery, and in the postpartum period: