New analysis highlights the power of testing and treatment to end the HIV epidemic in the U.S.

The vast majority (about 80 percent) of new HIV infections in the U.S. in 2016 were transmitted from the nearly 40 percent of people with HIV who either did not know they had HIV, or who received a diagnosis but were not receiving HIV care.

Published on the first day of CDC’s 2019 National HIV Prevention Conference, a new CDC Vital Signs report provides the latest data on the impact of undiagnosed and untreated HIV in the nation and underscores the critical need to expand HIV testing and treatment in the U.S.

Getting more people tested and in HIV care is a critical part of the proposed federal initiative, “Ending the HIV Epidemic – A Plan for Americaexternal icon.” The initiative’s goal is to end the HIV epidemic over 10 years by focusing first on the geographic areas with the greatest HIV burden, before expanding to reach all areas of the nation affected by HIV.

“We have an unprecedented opportunity to end the HIV epidemic in America,” said Assistant Secretary for Health at the U.S. Department of Health and Human Services, Admiral Brett P. Giroir, M.D. “We must close these glaring gaps in HIV prevention and care, and we must start now.”

The proposed initiative is designed to rapidly increase use of these strategies in the 48 counties with the highest HIV burden, as well as in Washington, D.C.; San Juan, Puerto Rico; and seven states with a disproportionate rural HIV burden. The goal is to reduce new HIV infections by at least 90 percent over 10 years.

According to the study findings, about 80 percent of new HIV transmissions are linked to people whose HIV is either undiagnosed or currently untreated. CDC recommends that once a person with HIV learns their status, they begin taking antiretroviral therapy, or ART. 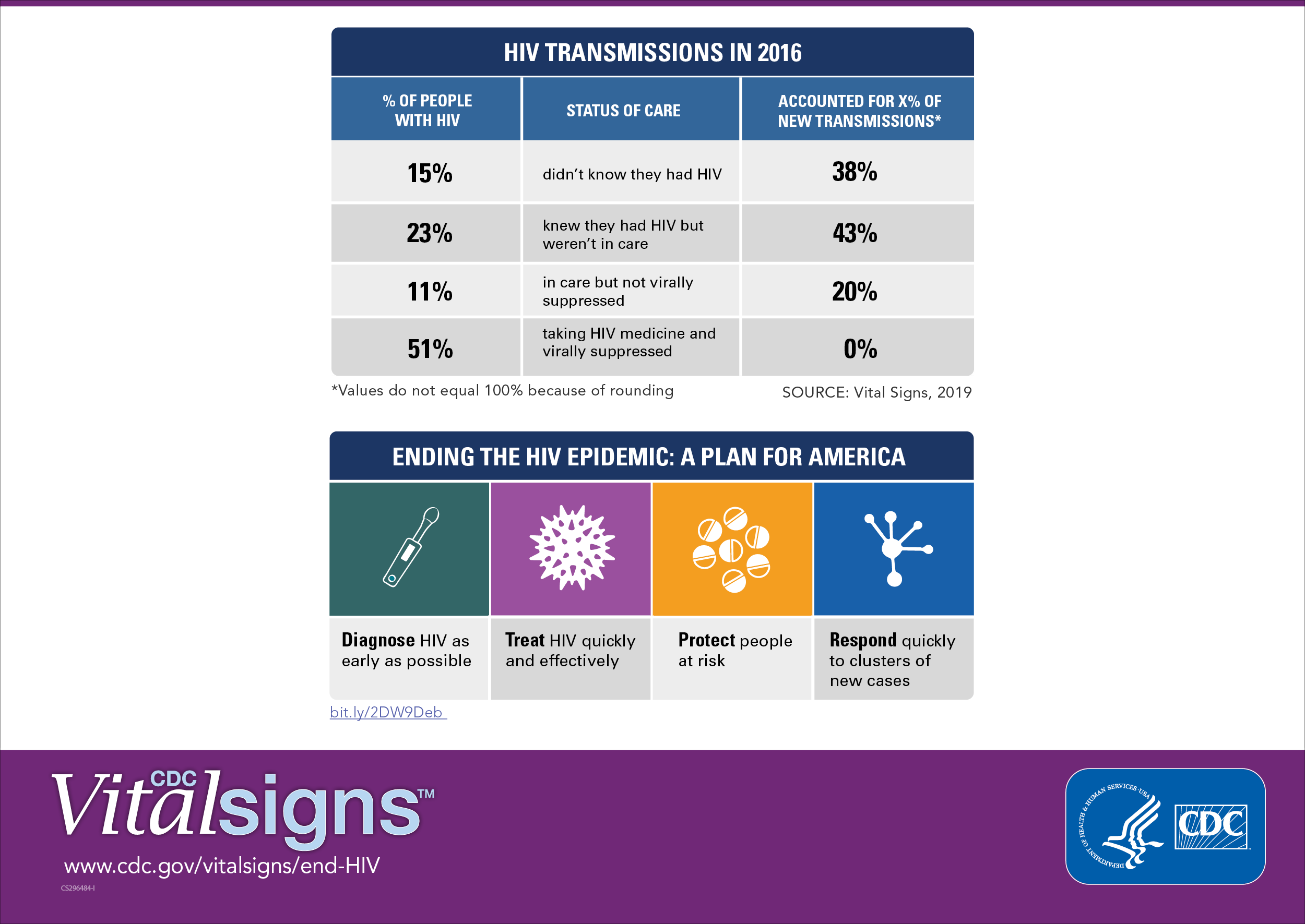 When taken as directed, ART reduces the amount of HIV in the body to a very low level —also known as viral suppression. Studies indicate that people who are virally suppressed can protect their own health and have effectively no risk of transmitting HIV to others through sex, as long as they stay virally suppressed.

The findings of the analysis highlight:

“Today, we have the tools to end the HIV epidemic,” said Jonathan Mermin, M.D., director of CDC’s National Center for HIV/AIDS, Viral Hepatitis, STD, and TB Prevention. “But a tool is only useful if it’s in someone’s hands. This is why it’s vital to bring testing and treatment to everyone with HIV – and to empower them to take control of their lives and change the course of the epidemic.”

What can everyone do to stop new HIV infections?

CDC works with national, state, and local partners to:

To read the entire Vital Signs report, visit: www.cdc.gov/vitalsigns/end-HIV. For more information about the federal initiative to end the HIV epidemic in the United States, visit: https://www.hiv.gov/ending-hiv-epidemic?s_cid=ht_endinghivinternet0001external icon.