More than 119,000 people suffered from bloodstream Staphylococcus aureus (staph) infections in the United States in 2017 – and nearly 20,000 died, according to a new Vital Signs report released today by the Centers for Disease Control and Prevention (CDC).

The findings show that hospital infection control efforts successfully reduced rates of serious staph infections in the U.S. Recent data, however, show that this success is slowing and staph still threatens patients.

According to electronic health record data from more than 400 acute care hospitals and population-based surveillance data from CDC’s Emerging Infections Program, MRSA bloodstream infections in healthcare settings decreased nationally by approximately 17 percent each year between 2005 and 2012. These reductions have recently started to stall, causing concern. The report also showed an almost 4 percent increase in MSSA infections that started outside of a healthcare setting each year from 2012 to 2017.

“Staph infections are a serious threat and can be deadly,” said CDC Director Robert Redfield, M.D. “U.S. hospitals have made significant progress, but this report tells us that all staph infections must remain a prevention priority for healthcare providers.”

Staph is a type of germ often found on human skin and on surfaces and objects that touch the skin. While the germ does not always harm people, it can get into the bloodstream and cause serious infections, which can lead to sepsis or death.

The risk for serious staph infection is greatest when people stay in healthcare facilities or have surgery, when medical devices are placed in their body, when they inject drugs, or when they come into close contact with someone who has staph. To reduce the spread of staph in the community, everyone should keep their hands clean, cover wounds, and avoid sharing items that contact skin, like towels, razors, and needles to prevent the spread of staph.

Healthcare providers and administrators can protect people by making staph prevention a priority. This includes implementing CDC recommendations, including the use of Contact Precautions (gloves and gowns), continually reviewing their facility infection data available from CDC’s National Healthcare Safety Network (NHSN), and considering other interventions if they are not meeting infection reduction goals.

Based on the facility, additional prevention measures could include screening patients at high risk, or decolonization (special bathing or medication that reduces germs people may carry and spread) at high risk periods or for certain types of procedures. Several healthcare systems in the United States have reported success after tailoring their approach to staph.

“We know infection prevention and control works but it’s not one-size-fits-all. Additional strategies, including decolonization, for example, may be needed in certain circumstances and patients, to ensure optimal prevention and the best outcome for the patients,” said Athena Kourtis, M.D, PhD, MPH, Associate Director for Data Activities in CDC’s Division of Healthcare Quality Promotion. 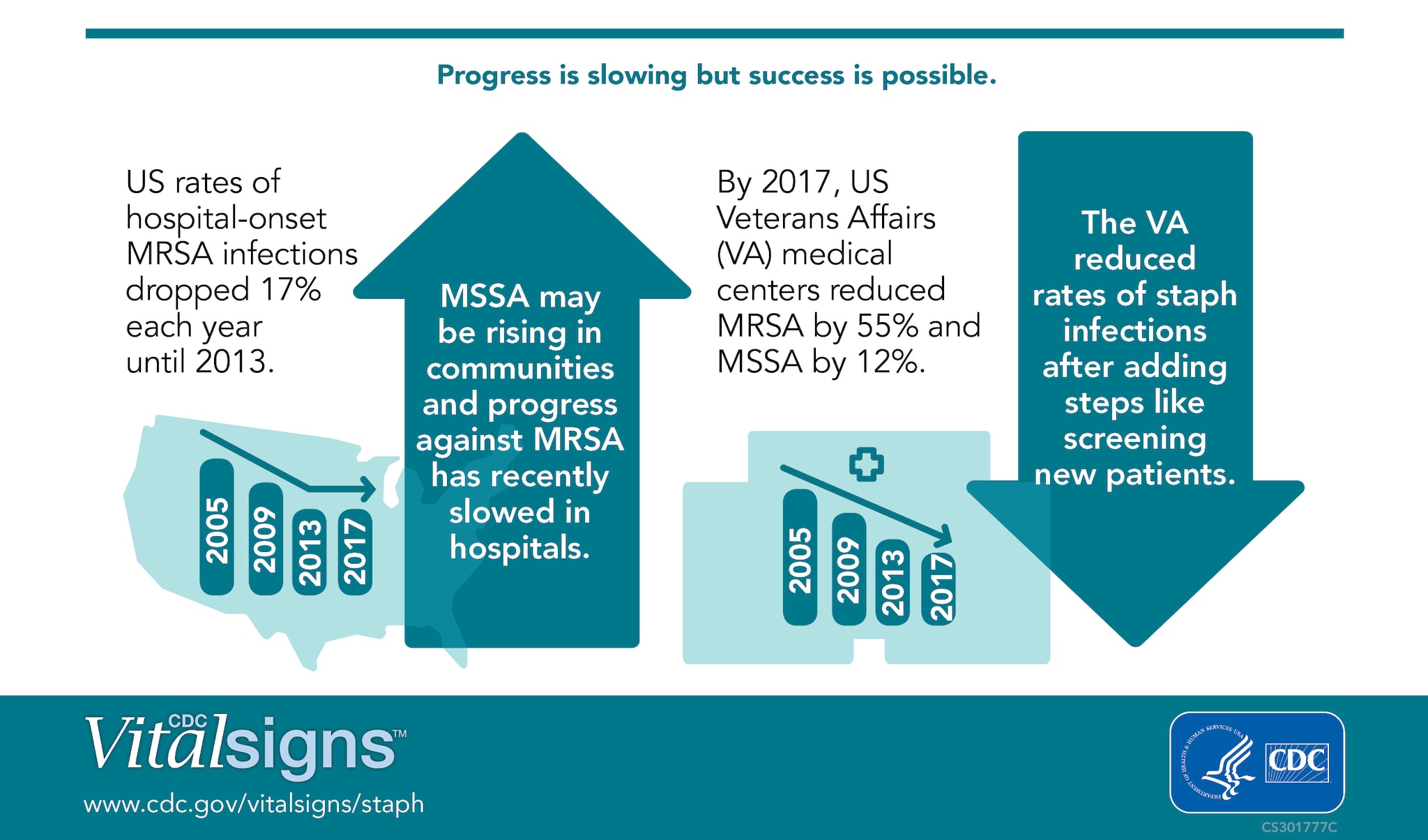 For example, the U.S. Department of Veterans Affairs medical centers reduced staph infections by 43 percent between 2005 and 2017 by implementing a multifaceted MRSA prevention program. The program included MRSA screening, use of Contact Precautions, and an increased emphasis on hand hygiene and other infection prevention strategies.

CDC, through its Antibiotic Resistance Solutions Initiative, supports academic investigators who are pursuing new ways to protect patients specifically from staph. They are also studying innovative infection prevention strategies to stop the spread of many other germs found in healthcare facilities. A full list of Fiscal Year 2018 funded extramural projects can be found at www.cdc.gov/ARinvestments. CDC expects to release additional MRSA burden data at the end of 2019 in its second Antibiotic Resistance Threats in the United States report.

To read more about the Trends in Methicillin-Resistant and in Methicillin-Susceptible Staphylococcus aureus Bloodstream Infections in the United States and the entire Vital Signs report, visit: www.cdc.gov/vitalsigns.

About Vital Signs
Vital Signs is a report that appears as part of the CDC’s Morbidity and Mortality Weekly Report. Vital Signs provides the latest data and information on key health indicators.