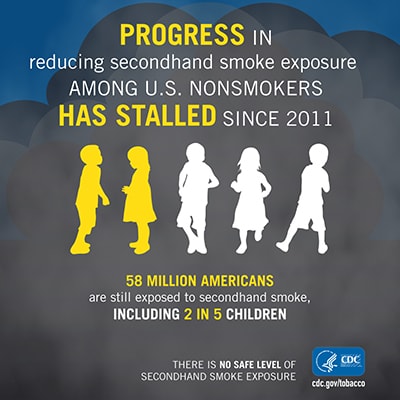 Progress in reducing exposure to secondhand smoke among U.S. nonsmokers has stalled in recent years, despite longstanding declines over the past three decades.

An estimated 58 million American nonsmokers (1 in 4) were still exposed to secondhand smoke from burning tobacco products such as cigarettes during 2013–2014, according to new data published by the Centers for Disease Control and Prevention (CDC).

“We know there’s no safe level of secondhand smoke exposure,” said CDC Director Robert R. Redfield, M.D. “These findings reveal that there is still much more to do to protect everyone—especially children—from this completely preventable health hazard.”

During 2011–2014, the percentage of nonsmokers exposed to secondhand smoke did not decline significantly across most demographic subgroups. This lack of decline could be attributable to the slowed adoption of comprehensive smoke-free laws in all workplaces, restaurants, and bars at the state and local levels during this period.

Twenty-seven states and the District of Columbia have comprehensive smoke-free laws, but adoption of such laws has slowed in recent years. However, there has been progress at the local level since the data in this study were collected, which could be reflected in future surveys. During 2015–2017, 199 communities adopted comprehensive smoke-free laws, and 21 have implemented such laws as of July 2018.

In addition to policies addressing smoking in public areas, some recent policies have addressed private settings – the main sources of children’s exposure to secondhand smoke. For example, the U.S. Department of Housing and Urban Development adopted a rule requiring public housing to be smoke-free by July 31, 2018.

Despite this recent smoke-free progress, disparities persist according to key findings in the MMWR:

“We know what works to reduce secondhand smoke exposure,” said Corinne Graffunder, Dr.Ph., M.P.H., director of CDC’s Office on Smoking and Health. “Smoke-free environments are the best way to fully protect all people from the dangers of secondhand smoke in the places they live, work, and gather.”

Secondhand smoke contains over 7,000 chemicals including about 70 that can cause cancer. Secondhand smoke is a known cause of sudden infant death syndrome; respiratory infections; ear infections; and asthma attacks in infants and children; as well as heart disease, stroke, and lung cancer in adult nonsmokers.

According to the 2014 Surgeon General’s Report, “The Health Consequences of Smoking – 50 Years of Progresspdf iconexternal icon,” each year exposure to secondhand smoke causes more than 41,000 deaths from lung cancer and heart disease among non-smoking adults and 400 deaths from Sudden Infant Death Syndrome.