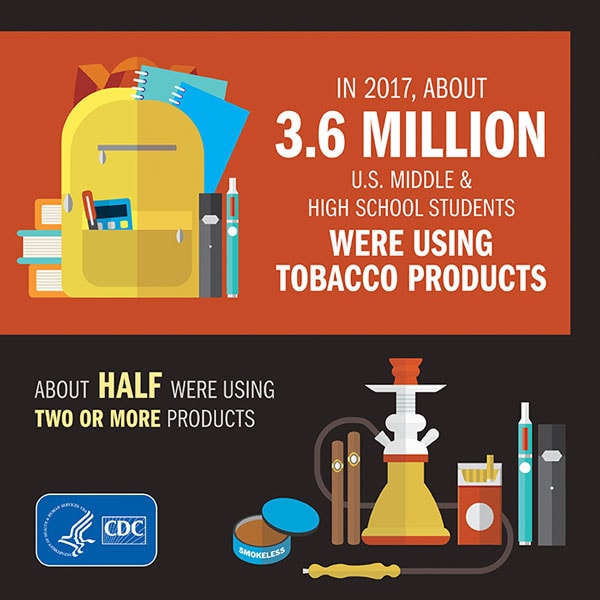 In 2017, about 3.6 million U.S. middle & high school students were using tobacco products. About half were using two or more products.

Fewer U.S. middle and high school students are using tobacco products – but too many still do, according to a new survey published by the Centers for Disease Control and Prevention (CDC) and the U.S. Food and Drug Administration’s (FDA) Center for Tobacco Products.

“Despite promising declines in tobacco use, far too many young people continue to use tobacco products, including e-cigarettes,” said CDC Director Robert R. Redfield, M.D. “Comprehensive, sustained strategies can help prevent and reduce tobacco use and protect our nation’s youth from this preventable health risk.”

Tobacco prevention and control strategies at national, state, and local levels — including tobacco product price increases, comprehensive smoke-free policies, media campaigns warning about the risks of youth tobacco product use, and youth access restrictions — likely contributed to the reductions in tobacco product use. In recent years, a growing number of states and localities have included e-cigarettes in these strategies.

“We’re encouraged by the recent declines in overall youth tobacco use; however, we must do more to address the disturbingly high number of youth who are using e-cigarettes,” said FDA Commissioner Scott Gottlieb, M.D. “The FDA is taking new enforcement steps to make sure all tobacco products – particularly e-cigarettes – aren’t being marketed to, sold to, or used by kids. We’re also advancing our framework for the regulation of these products through our review process to address youth initiation; and we’re investing in compelling, science-based campaigns to educate youth about the dangers of e-cigarettes.”

What can be done about youth tobacco use?

Tobacco use is the leading cause of preventable disease and death in the United States, and nearly all tobacco use begins during youth and young adulthood.

Regulating the manufacturing, distribution, and marketing of tobacco products, coupled with proven population-based strategies, can reduce youth tobacco use and initiation. These strategies include: