Illnesses from Mosquito, Tick, and Flea Bites Increasing in the US 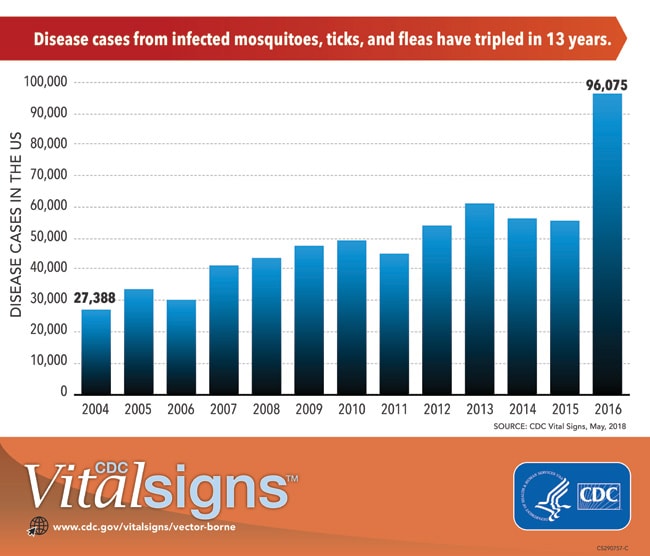 Illnesses from mosquito, tick, and flea bites have tripled in the U.S., with more than 640,000 cases reported during the 13 years from 2004 through 2016.  Nine new germs spread by mosquitoes and ticks were discovered or introduced into the United States during this time.

These findings are in the latest Vital Signs report by the Centers for Disease Control and Prevention. This is CDC’s first summary collectively examining data trends for all nationally notifiable diseases caused by the bite of an infected mosquito, tick, or flea. It provides detailed information on the growing burden of mosquito-borne and tickborne illnesses in the U.S.

“Zika, West Nile, Lyme, and chikungunya—a growing list of diseases caused by the bite of an infected mosquito, tick, or flea—have confronted the U.S. in recent years, making a lot of people sick. And we don’t know what will threaten Americans next,” said CDC Director Robert R. Redfield, M.D. “Our Nation’s first lines of defense are state and local health departments and vector control organizations, and we must continue to enhance our investment in their ability to fight against these diseases.”

Widespread and difficult to control, diseases from mosquito, tick, and flea bites are major causes of sickness and death worldwide. The growing number and spread of these diseases pose an increasing risk in the U.S. The report found that the nation needs to be better prepared to face this public health threat.

CDC scientists analyzed data reported to the National Notifiable Diseases Surveillance System for 16 notifiable vector-borne diseases from 2004 through 2016 to identify trends. Many infections are not reported or recognized, so it is difficult to truly estimate the overall cost and burden of these diseases. In 2016, the most common tickborne diseases in the U.S. were Lyme disease and ehrlichiosis/anaplasmosis. The most common mosquito-borne viruses were West Nile, dengue, and Zika. Though rare, plague was the most common disease resulting from the bite of an infected flea.

The increase in diseases caused by the bite of an infected mosquito, tick, or flea in the U.S. is likely due to many factors. Mosquitoes and ticks and the germs they spread are increasing in number and moving into new areas. As a result, more people are at risk for infection. Overseas travel and commerce are more common than ever before. A traveler can be infected with a mosquito-borne disease, like Zika, in one country, and then unknowingly transport it home. Finally, new germs spread by mosquito and tick bites have been discovered and the list of nationally notifiable diseases has grown.

“The data show that we’re seeing a steady increase and spread of tickborne diseases, and an accelerating trend of mosquito-borne diseases introduced from other parts of the world,” said Lyle Petersen, M.D., M.P.H., director of the Division of Vector-Borne Diseases in the CDC’s National Center for Emerging and Zoonotic Infectious Diseases. “We need to support state and local health agencies responsible for detecting and responding to these diseases and controlling the mosquitoes, ticks, and fleas that spread them.”

How can state and local public health agencies help?

What can everyone do to protect themselves from mosquito, tick, and flea bites?

CDC’s efforts to prevent diseases from mosquitoes and ticks