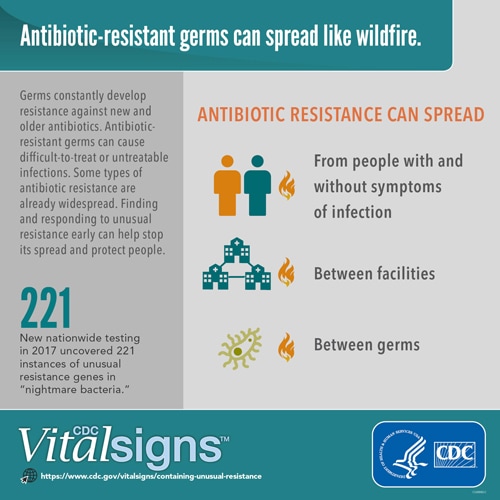 Germs with unusual resistance include those that cannot be killed by all or most antibiotics, are uncommon in a geographic area or the U.S., or have specific genes that allow them to spread their resistance to other germs.

Rapid identification of the new or rare threats is the critical first step in CDC’s containment strategy to stop the spread of antibiotic resistance (AR). When a germ with unusual resistance is detected, facilities can quickly isolate patients and begin aggressive infection control and screening actions to discover, reduce, and stop transmission to others.

“CDC’s study found several dangerous pathogens, hiding in plain sight, that can cause infections that are difficult or impossible to treat,” said CDC Principal Deputy Director Anne Schuchat, M.D. “It’s reassuring to see that state and local experts, using our containment strategy, identified and stopped these resistant bacteria before they had the opportunity to spread.”

The strategy complements foundational CDC efforts, including improving antibiotic use and preventing new infections, and builds on existing detection and response infrastructure. New data suggest that the containment strategy can prevent thousands of difficult-to-treat or potentially untreatable infections, including high-priority threats such as Candida auris and carbapenem-resistant Enterobacteriaceae (CRE).

To read more about the containment strategy and the entire Vital Signs report, visit www.cdc.gov/vitalsigns/containing-unusual-resistance.

Vital Signs is a report that appears as part of the CDC’s Morbidity and Mortality Weekly Report. Vital Signs provides the latest data and information on key health indicators.