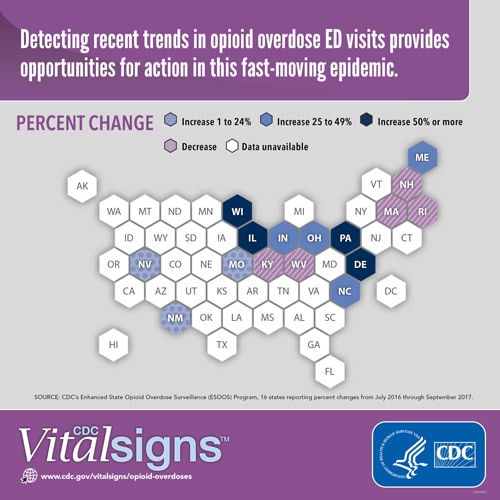 Data from emergency departments (EDs) show that the U.S. opioid overdose epidemic continues to worsen, according to the latest Vital Signs report by the Centers for Disease Control and Prevention (CDC).

The report examines the timeliest data available to CDC on ED visits for opioid overdoses across multiple states. Overall, ED visits (reported by 52 jurisdictions in 45 states) for suspected opioid overdoses increased 30 percent in the U.S., from July 2016 through September 2017. Opioid overdoses increased for men and women, all age groups, and all regions, but varied by state, with rural/urban differences. The findings highlight the need for enhanced prevention and treatment efforts in EDs and for greater access to evidence-based opioid use disorder treatments, including medication-assisted treatmentexternal icon and harm reduction services.

“Long before we receive data from death certificates, emergency department data can point to alarming increases in opioid overdoses,” said CDC Acting Director Anne Schuchat, M.D. “This fast-moving epidemic affects both men and women, and people of every age. It does not respect state or county lines and is still increasing in every region in the United States.”

The sharp increases and variation across states and counties indicate the need for better coordination to address overdose outbreaks spreading across county and state borders. Closer coordination between public health and public safety agencies can support identification of changes in supply and use of illicit opioids, further allowing communities to take appropriate action to reduce opioid overdoses.

CDC also examined data from the National Syndromic Surveillance Program (NSSP) BioSense platform, using ESSENCE (Electronic Surveillance System for the Early Notification of Community-based Epidemics) software. Analysis of data from 52 jurisdictions in 45 states, which covers over 60 percent of ED visits in the U.S., found that from July 2016 through September 2017:

“Research shows that people who have had an overdose are more likely to have another. Emergency department education and post-overdose protocols, including providing naloxone and linking people to treatment, are critical needs,” said Alana Vivolo-Kantor, Ph.D., behavioral scientist in CDC’s National Center for Injury Prevention and Control. “Data on opioid overdoses treated in emergency departments can inform timely, strategic, and coordinated response efforts in the community as well.”

A companion editorial “Opportunities for Prevention and Intervention of Opioid Overdose in the Emergency Departmentexternal icon,” was also released today in Annals of Emergency Medicine.

Vital Signs is a CDC report that typically appears on the first Tuesday of the month as part of the CDC journal Morbidity and Mortality Weekly Report. The report provides the latest data and information on key health indicators.