About three in ten US veterans use tobacco products

Veterans use tobacco at much higher rates than most non-veterans 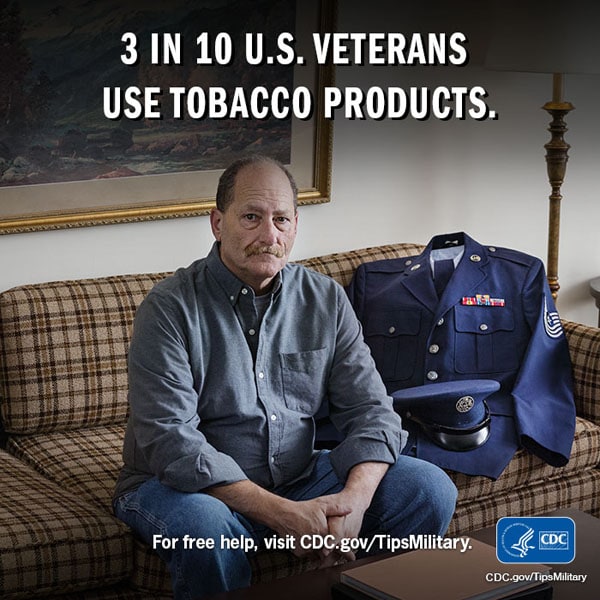 About 3 in 10 U.S. military veterans used some form of tobacco product during 2010–2015, according to new data published by the Centers for Disease Control and Prevention in today’s Morbidity and Mortality Weekly Report (MMWR). Tobacco product use was higher among veterans than among non-veterans for males and females across all age groups, except males ages 50 years and older.

CDC used data from the National Survey on Drug Use and Health (NSDUH) to assess the different tobacco products currently used (in the past 30 days) by U.S. veterans and non-veterans.  Current use among veterans was highest for cigarettes (21.6 percent), followed by cigars (6.2 percent), smokeless tobacco (5.2 percent), roll-your-own tobacco (3.0 percent), and pipes (1.5 percent).

“These findings highlight the importance of further protecting the health of our military veterans,” said Corinne Graffunder, Dr.P.H., director of CDC’s Office on Smoking and Health. “We must redouble our efforts to help veterans quit and reduce the preventable suffering and premature death caused by tobacco use.”

“VA has more tobacco use treatment options available than ever and we are committed to continuing to lower the rate of smoking among Veterans enrolled in VA and to providing individualized support to help Veterans become tobacco-free,” said Kim Hamlett-Berry, Ph.D., Program Director of VA Tobacco & Health Policy. “Historically, rates of smoking among all Veterans—including those enrolled in VA—have been high. However, we have seen progress with declines in cigarette use among enrolled Veterans. The 2015 VA Survey of Enrollees reported that 16.8 percent of Veterans enrolled for health care in VA identified as a current smoker.”

Because more than a third of active duty military who smoke started after enlisting, evidence-based tobacco control interventions that are effective for both current and former military members are important to reduce tobacco use among veterans.

Veterans who receive their health care through VA can access treatment, including medications and counseling from their provider, as well as free quit help at 1-855-QUIT-VET (1-855-784-8838) and SmokefreeVETexternal icon, a supportive text messaging service. Veterans may also access online tobacco cessation resources at https://www.publichealth.va.gov/smoking/external icon and https://smokefree.gov/veteransexternal icon.

Non-veterans and veterans not enrolled in VA health care can call 1-800-QUIT-NOW (1-800-784-8669) to speak with a quitline counselor or visit https://www.smokefree.govexternal icon for comprehensive mobile health resources, evidence-based information, and support. Active duty and retired service members and their families can access quit services through their TRICAREexternal icon coverage and Department of Defense programs.