One in five US adults still using tobacco products in 2015

Of the nation’s nearly 49 million tobacco users, most are smokers 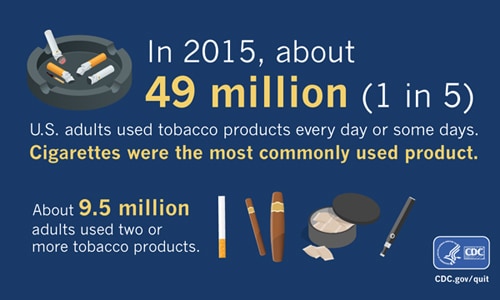 About 1 in 5 U.S. adults used some form of tobacco product in 2015, according to new data published by the Centers for Disease Control and Prevention and the U.S. Food and Drug Administration’s (FDA) Center for Tobacco Products in the Morbidity and Mortality Weekly Report (MMWR).

This is the first time CDC, in coordination with FDA, has used the National Health Interview Survey (NHIS) to assess the range of different tobacco products used by U.S. adults. The survey has been used to assess current (“every day” or “some day”) cigarette smoking among U.S. adults since 1965, but ongoing surveillance of other tobacco products began more recently.

“Too many Americans are harmed by cigarette smoking, which is the nation’s leading preventable cause of death and disease,” said CDC Director Brenda Fitzgerald, M.D. “CDC will continue to use proven strategies to help smokers quit and to prevent children from using any tobacco products.”

Key findings from analysis of tobacco use data

These data from the 2015 National Health Interview Survey also found that 9.5 million American adults reported “every day” or “some day” use of two or more tobacco products. Among all adults, cigarettes were the most commonly used product (15.1 percent); followed by e-cigarettes (3.5 percent); cigars, cigarillos, or filtered little cigars (3.4 percent); smokeless tobacco (2.3 percent); and pipes, water pipes, or hookahs (1.2 percent).

The data also show that:

“These results make clear that more action is needed to reduce the disease and death caused by cigarette use – and the FDA has announced a comprehensive approach to do just that,” said FDA Commissioner Scott Gottlieb, M.D. “As part of this effort, the FDA is focusing on the role that nicotine plays in creating and sustaining addiction to combustible cigarettes, by seeking to regulate the nicotine content in cigarettes to render them minimally or non-addictive. This will be coupled with efforts to encourage innovation of potentially less harmful products, including electronic nicotine delivery systems.”

Full implementation of comprehensive state tobacco control programs, in conjunction with FDA regulation of tobacco products, are vital to accelerate progress toward reducing tobacco-related diseases and deaths in the United States. Targeted interventions are also needed to reach subpopulations with the greatest burden of use, which might vary by tobacco product type.

Cigarette smoking remains the leading preventable cause of death and disease in the United States. Smoking kills an estimated 480,000 Americans each year, and about 16 million Americans suffer from a smoking-related illness. For more information or for free help quitting, call 1-800-QUIT-NOW or go to www.smokefree.govexternal icon.