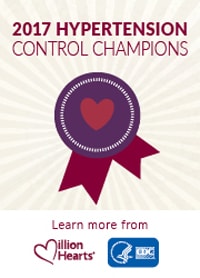 The Champions, who provide care to more than 1.2 million adults, focused on proven strategies to help their patients achieve blood pressure control at rates at or above the Million Hearts® target of 70 percent.

“Too many Americans have high blood pressure, putting them at greater risk for a heart attack, stroke, dementia and other serious health threats,” said CDC Director Brenda Fitzgerald, M.D. “Controlling blood pressure is one of the most effective ways to keep people healthy. We applaud these Champions for such great progress.”

“We are excited to host this Challenge and showcase successful strategies used by our 2017 Champions to keep blood pressure under safe control, prevent heart attacks and strokes, and save lives,” said Janet Wright, M.D., a board-certified cardiologist and executive director of Million Hearts. “We had a higher than ever number of entrants this year, and we hope that these Champions inspire teams all over the country to make hypertension control a priority. We are already looking forward to celebrating the achievements of future Champions in the years to come.”

To be eligible, entrants shared verifiable high blood pressure control data on their patients. They highlighted successful strategies and best practices adopted by the practice or system, such as the use of health information technology and team-based care. All Champions achieved control rates of 70 percent or greater for their adult patients by using a variety of approaches, including:

Million Hearts is a national initiative, co-led by the CDC and Centers for Medicare & Mediciad Servicesexternal icon to prevent 1 million heart attacks and strokes between 2017 and 2022. Saving lives through better blood pressure control has been a longstanding CDC priority. CDC recognizes the Champions’ performance and shares their lessons learned to inspire others to focus on achieving similar success.

For more information about the initiative and resources, visit http://millionhearts.hhs.govexternal icon.