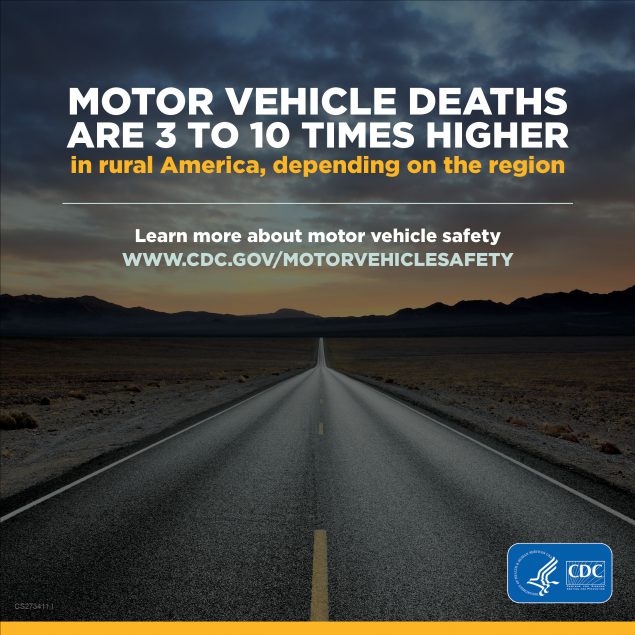 Adult motor vehicle drivers and passengers in America’s most rural counties had motor-vehicle death rates 3 to 10 times higher than those in the most urban counties, according to data released today in CDC’s Morbidity and Mortality Weekly Report Rural Health Series.

Overall, the study found lower seat belt use, higher death rates, and a higher proportion of drivers and passengers who were not buckled up at the time of the fatal crash in rural areas of the nation.

“We know seat belts save lives,” said CDC Director Brenda Fitzgerald, M.D. “These findings remind us that no matter what kind of road you are traveling on, it is important for everyone to buckle up every time on every trip.”

Key findings from the CDC study:

“Although we know motor vehicle crash-related deaths have been historically higher in rural areas, this study shows that the more rural the area, the higher the risk,” said Laurie Beck, M.P.H., an epidemiologist in CDC’s Division of Unintentional Injury Prevention. “It also helps us confirm what works to prevent these crash deaths, such as primary enforcement seat belt laws and seat belt use. These new findings will allow us to better target our prevention efforts as we work toward zero road traffic deaths in the U.Sexternal icon.”

States and communities can use evidence-based interventions to reduce rural-urban disparities in seat belt use and death rates for adult motor vehicle drivers and passengers.