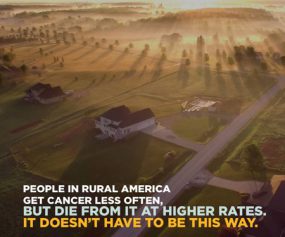 Learn more about Cancer prevention and control in rural communities at CDC.

The report is the first complete description of cancer incidence and mortality in rural and urban America. Researchers found that rates of new cases for lung cancer, colorectal cancer, and cervical cancer were higher in rural America. In contrast, rural areas were found to have lower rates of new cancers of the female breast and prostate. Rural counties had higher death rates from lung, colorectal, prostate, and cervical cancers.

“While geography alone can’t predict your risk of cancer, it can impact prevention, diagnosis and treatment opportunities – and that’s a significant public health problem in the U.S.,” said CDC Acting Director Anne Schuchat, M.D. “Many cancer cases and deaths are preventable and with targeted public health efforts and interventions, we can close the growing cancer gap between rural and urban Americans.”

“Cancer – its causes, its prevention, and its treatment – is complicated,” said Lisa C. Richardson, M.D., oncologist and director of CDC’s Division of Cancer Prevention and Control. “When I treat cancer patients, I don’t do it alone – other healthcare professionals and family members help the patient during and after treatment. The same is true for community-level preventive interventions. Partnerships are key to reducing cancer incidence and the associated disparities.”

The CDC researchers identify a number of proven strategies that can reduce the gaps in new cancer cases and deaths. Healthcare providers in rural areas can:

These data from CDC provide a clear direction for the work that needs to be done to reduce cancer disparities throughout the U.S., and provide the foundation for proven strategies that could be implemented. Proven strategies to improve health-related behaviors, increased use of vaccinations that prevent infections that can cause cancer, and use of cancer screening tests – particularly among people that live in rural and underserved areas – can help reduce the rates of cancer and cancer deaths across America.