Symptoms can be reduced with physical activity and educational programs 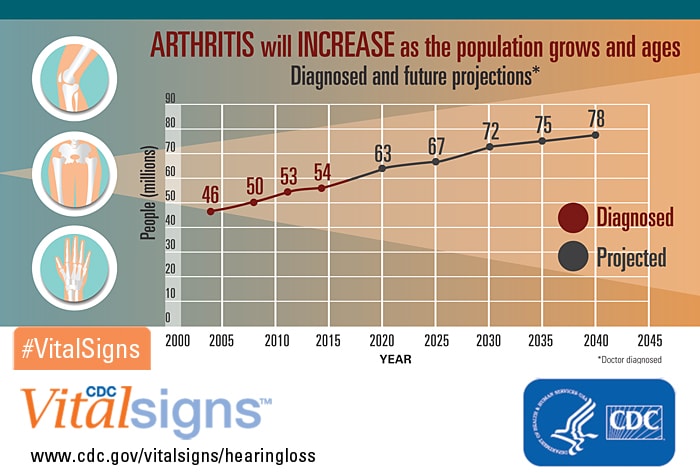 More than 24 million adults with arthritis have activity limitations from their disease. The percentage of adults with arthritis who have activity limitations grew from 35.9% in 2002 to 42.8% in 2014, a significant increase of 20% overall and independent of the aging of the population. The everyday activities of these adults are limited by arthritis, such as holding a cup, lifting a grocery bag, or walking to their car, according to a new CDC Vital Signs report released today.

More than 54 million adults in the U.S, or about 1 in 4, have arthritis (a condition that can result in pain, aching, stiffness, and swelling of the joints). Almost 60 percent, or about 32 million, of those with arthritis are of working age (ages 18-64).

“Arthritis symptoms keep millions of Americans from going about their daily routines,” said CDC Acting Director Anne Schuchat, M.D. “Doctors and loved ones can help people with arthritis by encouraging them to be as physically active as they can be.  Physical activity is a proven strategy to ease pain and reduce symptoms among people with arthritis.”

Among the key findings: