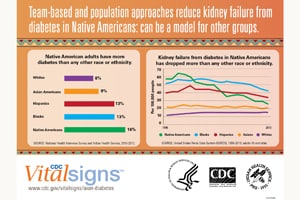 Kidney failure is a devastating and costly condition that requires regular dialysis or a kidney transplant for survival. According to the Vital Signs report, the estimated yearly cost in 2013 of kidney failure from diabetes was $82,000 for one person and $14 billion for Medicare overall. Diabetes-related kidney failure is delayed or prevented by controlling blood pressure and blood sugar, using kidney-protective medicines, and regular kidney testing. 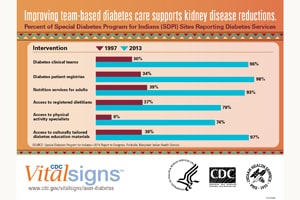 “The 54 percent decline in kidney failure from diabetes followed implementation of public health and population approaches to diabetes as well as improvements in clinical care by the IHS,” said Mary L. Smith, Indian Health Service principal deputy director. “We believe these strategies can be effective in any population. The patient, family, and community are all key partners in managing chronic diseases, including diabetes.”

Key Findings from the report include:

The Federal Government is supporting the fight against kidney failure in Native Americans and other U.S. populations by:

For more information on the Indian Health Service and CDC’s work, visit: www.ihs.gov and www.cdc.gov.