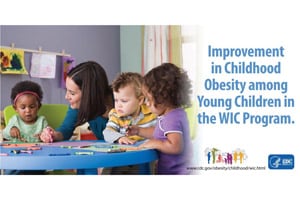 Obesity among low-income children (ages 2-4 years) enrolled in the Special Supplemental Nutrition Program for Women, Infants, and Children (WIC) decreased from 15.9 percent in 2010 to 14.5 percent in 2014.  In addition, 34 of 56 WIC State Agencies reported modest decreases in obesity among young children.

The findings come from a study jointly released today by the Centers for Disease Control and Prevention (CDC) and the United States Department of Agriculture (USDA) in the Morbidity and Mortality Weekly Report. CDC and USDA researchers analyzed obesity trends from 2000 to 2014 among young children, ages 2-4 years, from low-income families enrolled in WIC. The children’s weight and height were measured by WIC clinic-trained staff according to a standard protocol, and children’s weight and height records during the most recent certification were included.

“We are beginning to see some progress reducing childhood obesity in some areas, but more progress is needed,” said CDC Director Tom Frieden, M.D., M.P.H. “Only by accelerating and sustaining this trend can we reverse the epidemic of childhood obesity.”

The CDC/USDA study found that:

“As a leading public health program for mothers and their young children, WIC is committed to promoting healthy lifestyles among its participants.  A variety of efforts to reduce childhood obesity are under way at the national, state, and community levels, and this study suggests that they’re starting to make a positive impact,” said Kevin Concannon, Under Secretary for Food, Nutrition and Consumer Services at USDA.  “But we can’t stop there. USDA will continue to tackle this issue through our programs and partnerships because we all have a role to play in reducing childhood obesity.”

The authors noted several factors that may have contributed to the drop in obesity among young children enrolled in the WIC program: