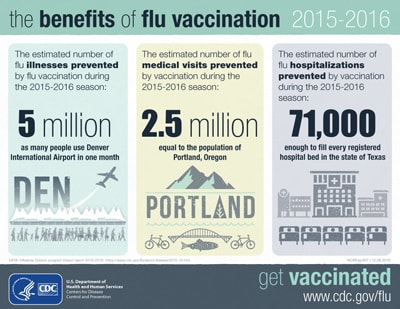 As of early November, only about 2 out of 5 people in the United States reported having gotten this season’s flu vaccine, yet flu vaccine offered substantial benefit last season by preventing an estimated 5 million flu illnesses and 71,000 flu hospitalizations. CDC is releasing this information during the 11th National Influenza Vaccination Week (NIVW), an event to encourage ongoing flu vaccination into the holidays and beyond.

“We are glad to see that people are making the decision to protect themselves and their families from flu, but coverage is still low and we urge people to get vaccinated if they haven’t yet,” said Nancy Messonnier, M.D., director of CDC’s National Center for Immunization and Respiratory Diseases. “We have a tool that is proven to prevent flu illness and hospitalization but millions of people are not taking advantage of it. Too many people are unprotected.”

Although flu vaccination estimates among adults and children are similar to early estimates from last season for all age groups, CDC is looking carefully at vaccination rates for children and for adults ages 50 years and older.

“We are urging parents to make sure their children get a flu shot this season, as the nasal-spray vaccine is not recommended for the 2016-2017 flu season. An annual flu vaccine is very important protection for children,” said Joe Bresee, M.D., a pediatrician and chief of the Epidemiology and Prevention Branch of CDC’s Influenza Division.

Concern about vaccination among older adults is prompted by detection of a three percentage point decrease in vaccine coverage among people 50 years and older in final vaccine coverage estimates for 2015-16 compared to 2014-15. “It’s too soon to say whether vaccination in people 50 and older will rebound this season. We certainly hope it will,” Messonnier said. “About a third of people ages 50 to 64 have medical conditions that put them at high risk of serious flu complications; and we know that declining immune function puts people 65 and older at high risk. While flu vaccination is recommended for everyone 6 months and older, it’s especially important that people in high-risk groups get vaccinated.”

Reducing the burden of disease

Flu is unpredictable and every season is different. CDC reports that H3N2 viruses are predominant so far. H3N2-predominant seasons often are more severe, especially for young children and people 65 and older. So far, most influenza viruses collected since October 1 remain similar to the vaccine viruses recommended for vaccine production.

The report also updates estimates on flu hospitalizations and deaths in the United States since 2010. CDC estimates that flu-related hospitalizations ranged from 140,000 to 710,000. The previous citation of “more than 200,000” annual flu-related hospitalizations was based on data from 1979 to 2001. Influenza-associated deaths in the United States are estimated to have ranged from 12,000 to 56,000 since 2010. The previously cited range of “3,000 to 49,000” was based on respiratory and circulatory deaths reported from 1976 to 2007.

National Influenza Vaccination Week was established in 2005 to highlight the importance of continuing flu vaccination throughout the flu season. Past vaccine coverage data has shown that flu vaccination activity drops after November. However, influenza activity has peaked between December and February about 75 percent of the time in the past 30 years, and significant flu activity can occur as late as May, meaning that vaccination after November would still offer substantial protection during most seasons.