Higher use and exposure among certain racial and socioeconomic groups 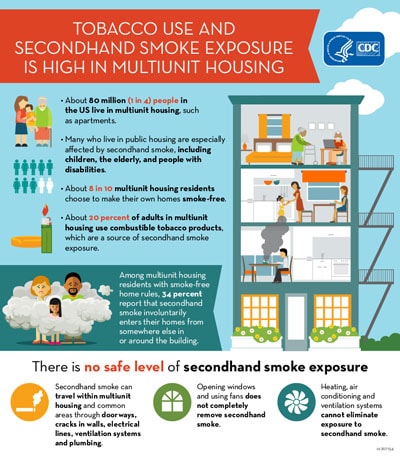 Americans living in multiunit housing, such as apartments and condominiums, are more likely to use tobacco products and less likely to have smoke-free home rules than people living in single-family housing, according to a new study by the Centers for Disease Control and Prevention.

Published in the American Journal of Preventive Medicine, this is the first national study to document these comparisons. CDC researchers also found about 34 percent of multiunit housing residents who have adopted voluntary smoke-free home rules have recently been exposed to secondhand smoke that entered their living unit from nearby living units or shared areas.

Disparities in tobacco use were also observed across population groups. Use of any tobacco product in multiunit housing was highest in their respective demographic categories among men; adults ages 45-64; non-Hispanic blacks; unmarried adults; lesbian, gay, and bisexual adults; people living in the Midwest; people with a high school diploma but no college education; and people with annual household income less than $20,000.

“The Surgeon General has concluded there is no safe level of exposure to secondhand smoke. Opening windows or using ventilation systems does not effectively eliminate secondhand smoke exposure in multiunit housing,” said Brian King, Ph.D., deputy director of research translation in the CDC’s Office on Smoking and Health and a co-author of the study. “Exposure to secondhand smoke from cigarettes causes more than 41,000 deaths among nonsmoking adults each year, and about $5.6 billion annually in lost productivity caused by premature death.”

Since 2009, the U.S. Department of Housing and Urban Development (HUD) has encouraged public housing authorities to implement smoke-free policies on their properties. In 2010, HUD issued similar guidance to owners and managers of multi-family housing rental assistance programs, such as Section 8. On November 12, 2015, HUD proposed a policy for U.S. public housing that, if implemented as proposed, would prohibit the use of “lit” tobacco products (cigarettes, cigars, or pipes) in all living units, indoor common areas, administrative offices, and all outdoor areas within 25 feet of housing and administrative office buildings. As of October 2015, several hundred public housing authorities across the U.S. had already instituted such policies.

Additionally, 22 communities in California have enacted laws that prohibit smoking in all multiunit housing, including living units, in both government-subsidized and privately owned multiunit housing.  A growing number of owners and managers of multiunit housing have also voluntarily implemented smoke-free policies on their properties.