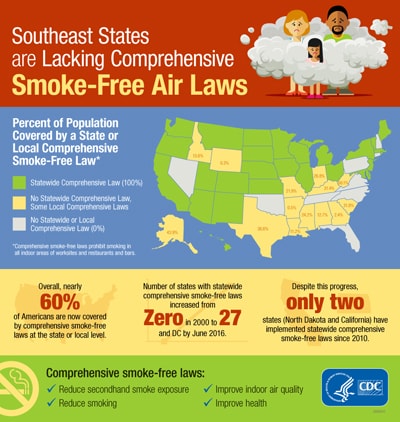 Ten years after the Surgeon General’s report on the dangers of exposure to secondhand tobacco smoke, no states in the Southeast have a statewide comprehensive smoke-free law, according to data from the Centers for Disease Control and Prevention (CDC) published in today’s Morbidity and Mortality Weekly Report (MMWR).  A comprehensive smoke-free law is one prohibiting smoking in all private worksites, restaurants and bars.

“Ten years ago, the Surgeon General concluded there is no risk-free level of secondhand smoke exposure,” said CDC Director Tom Frieden, M.D., M.P.H. “We’ve made great progress in protecting many Americans from secondhand smoke exposure, but millions of Americans, especially those living in southeastern states, are still unprotected from this completely preventable health hazard.”