Cigarette smoking among U.S. high school students at an all-time low, but e-cigarette use a concern 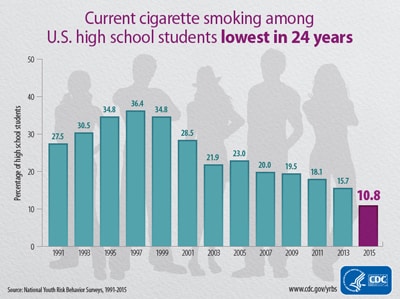 Cigarette smoking among high school students dropped to the lowest levels since the National Youth Risk Behavior Survey (YRBS) began in 1991, but the use of electronic vapor products, including e-cigarettes, among students poses new challenges according to the 2015 survey results released today by the Centers for Disease Control and Prevention.

Although current cigarette use decreased significantly from 28 percent in 1991 to 11 percent in 2015, new data from the 2015 survey found that 24 percent of high school students reported using e-cigarettes during the past 30 days.

“Current cigarette smoking is at an all-time low, which is great news. However, it’s troubling to see that students are engaging in new risk behaviors, such as using e-cigarettes,” said CDC Director Tom Frieden, M.D., M.P.H. “We must continue to invest in programs that help reduce all forms of tobacco use, including e-cigarettes, among youth.”

In May 2016, the U.S. Food and Drug Administration finalized an important rule extending its authority to all tobacco products, including e-cigarettes. The rule includes, for the first time, a restriction on the sale of these products to minors nationwide.

A wealth of data on teen health-related behaviors

The YRBS provides important data related to student behaviors, such as behaviors that contribute to unintentional injuries and violence.

The 2015 survey findings indicated that youth continue to be at risk by using wireless devices while driving:

However, nationwide, the percentage of students who had not gone to school because of safety concerns is still high.

The survey also included questions on prescription drug use.

Trends in dietary and sedentary-related behaviors, such as drinking sugar-sweetened beverages and screen time, have varied in recent years:

“Health risk behaviors among youth vary over time and across the nation, making the YRBS an important tool to better understand youth. The YRBS helps us identify newly emerging behaviors and monitor long-standing youth risk behaviors over time,” said Laura Kann, Ph.D., chief of CDC’s School-Based Surveillance Branch. “While overall trends for the 2015 report are positive, the results highlight the continued need for improvements in reducing risks among teens.”

CDC’s YRBSS is the only surveillance system designed to monitor a wide range of priority health risk behaviors among representative samples of high school students at the national, state, and local levels.

More than 15,000 U.S. high school students participated in the 2015 National YRBS. Parental permission was obtained for students to participate in the survey, student participation was voluntary, and responses were anonymous. States and large urban school districts could modify the questionnaire to meet their needs. The 2015 YRBSS report includes National YRBS results and results from surveys conducted in 37 states and 19 large urban school districts.

The National YRBS is one of three HHS-sponsored surveys that provide data on substance abuse among youth nationally. The others are the National Survey on Drug Use and Health (NSDUH), sponsored by the Substance Abuse and Mental Health Services Administration – a primary source of statistics on substance use among Americans age 12 and older (http://www.samhsa.gov/data/population-data-nsduh) – and the Monitoring the Future (MTF) study funded by the National Institute on Drug Abuse/National Institutes of Health and conducted by the University of Michigan’s Institute for Social Research (http://monitoringthefuture.org). The MTF study tracks substance use and related attitudes among students in the 8th, 10th, and 12th grades.

The 2015 YRBS data are available at www.cdc.gov/yrbs.