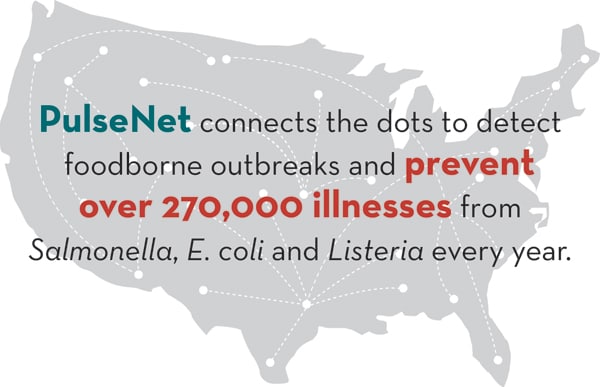 A national network of public health laboratories prevents an estimated 270,000 cases of food poisoning and saves half a billion dollars every year, according to a study released today.

By preventing foodborne illness, PulseNet not only saves lives but also saves an estimated $500 million a year in medical costs and lost productivity, according to the study published in the American Journal of Preventive Medicine. In comparison, the network costs public health agencies about $7 million a year to run. So, for every dollar spent, an estimated $70 is saved.

PulseNet is a national laboratory network that connects cases of foodborne illness by comparing DNA fingerprints of the foodborne bacteria and matching illnesses across the country that may be from the same source. Information about the bacteria making people sick is entered by labs across the country into a network database, which can be accessed by local and state health officials. By matching cases of illness and finding outbreaks, public health investigators can work quickly to find the source of the illness, recall contaminated food, and prevent more illnesses.

“PulseNet has provided an incredible return on investment with hundreds of thousands of people able to stay healthy as a result of this early warning system,” said CDC Director Tom Frieden, M.D., M.P.H. “Advanced molecular detection technology, such as whole genome sequencing, is enhancing CDC PulseNet’s ability to save lives right now – and promises to save more American lives in the future.”

Since it started in 1996, PulseNet has revolutionized how foodborne disease outbreaks are detected and investigated. Before PulseNet, foodborne disease outbreaks often went undetected or were discovered only after they grew very large. Using PulseNet methods, scientists can now find outbreaks even if only a few people are sick and they live in different parts of the country. Every year, PulseNet identifies about 1,500 clusters of illness caused by E. coli, Listeria and Salmonella, including about 25 multistate outbreaks linked to food.

Many products and food handling practices are safer today because of PulseNet investigations, which have informed production changes in the food industry and new or improved guidance, policy and regulations. For example, outbreaks tied to peanut butter led to new standards to keep Salmonella out of processed foods, and outbreaks tied to ground poultry and chicken parts resulted in new standards that reduced allowable levels of harmful bacteria in raw poultry. These improvements help make the food supply even safer and prevent thousands of foodborne illnesses every year.

PulseNet is undergoing a major technological change to improve its ability to find outbreaks. Whole genome sequencing is providing even more accurate fingerprinting for a better match among bacteria, making PulseNet more powerful and precise. This technology can help disease detectives find foodborne outbreaks faster and investigate them more effectively.

For example, in the fall of 2014, 35 people were sickened during a multistate outbreak of listeriosis; 34 people were hospitalized and seven died. Scientists used whole genome sequencing to get a detailed DNA analysis of the Listeria strains involved. As a result, they could link cases more precisely and began an investigation a week earlier than if they had only used standard DNA fingerprinting. The investigation found that prepackaged caramel apples had been contaminated, and companies quickly recalled the apples.

“We’re in the midst of an exciting time of technological change that will help stop more foodborne disease outbreaks and help keep people healthy,” said Robert Tauxe, M.D., M.P.H., director of CDC’s Division of Foodborne, Waterborne, and Environmental Diseases. “We’re working on methods that will make PulseNet faster, perhaps allowing patients to learn they’re part of an outbreak within a few days of getting sick.”

Future technological advances are important because they may help PulseNet overcome challenges posed by new kinds of tests that doctors are increasingly using to diagnose foodborne illness. These tests (known as culture-independent diagnostic tests) present a challenge for PulseNet because they give quick results but don’t provide the living bacteria that the network’s current technology needs to create and analyze DNA fingerprints. Without those fingerprints, PulseNet won’t be able to find outbreaks. CDC is working with public health officials, diagnostic labs, test manufacturers, and doctors to find solutions so we can continue discovering and solving foodborne outbreaks.

CDC launched PulseNet in 1996 in collaboration with state public health laboratories, the Food and Drug Administration, the U.S. Department of Agriculture, and the Association of Public Health Laboratories. PulseNet’s success is made possible because of participation by public health officials and health care providers. The idea came after a 1993 outbreak of E. coli O157 that sickened more than 700 people and killed four children. Experts determined that the outbreak could have been stopped sooner if all public health labs did the same DNA fingerprinting tests and shared results; this led to the creation of PulseNet.

For more information about PulseNet, visit http://www.cdc.gov/pulsenet/. The study released today, “An Economic Evaluation of PulseNet,” is available at http://www.ajpmonline.org/content/infoformedia.