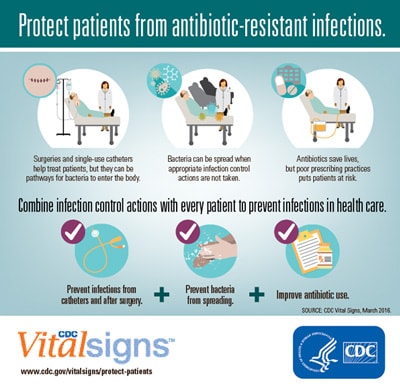 “New data show that far too many patients are getting infected with dangerous, drug-resistant bacteria in healthcare settings,” said CDC Director Tom Frieden, M.D., M.P.H. “Doctors and healthcare facilities have the power to protect patients – no one should get sick while trying to get well.”

Many of the most urgent and serious antibiotic-resistant bacteria threaten patients while they are being treated in healthcare facilities for other conditions, and may lead to sepsis or death. In acute care hospitals, 1 in 7 catheter- and surgery-related HAIs can be caused by any of the six antibiotic-resistant bacteria listed below. That number increases to 1 in 4 infections in long-term acute care hospitals, which treat patients who are generally very sick and stay, on average, more than 25 days.

The six antibiotic-resistant threats examined are:

The national data in this Vital Signs report, along with data from CDC’s latest annual progress report on HAI prevention, show that acute care hospitals have achieved:

The Vital Signs report also examines the role of Clostridium difficile (C. difficile), the most common type of bacteria responsible for infections in hospitals. C. difficile caused almost half a million infections in the United States in 2011 alone. CDC’s annual progress report shows that progress has been made in decreasing hospital-onset C. difficile infections by 8 percent between 2011 and 2014.

CDC is calling on doctors, nurses, health care facility administrators, and state and local health departments to continue to do their part to prevent HAIs. The report recommends doctors and nurses combine three critical efforts to accomplish this:

“For clinicians, prevention means isolating patients when necessary,” said Clifford McDonald, M.D., Associate Director for Science at CDC’s Division of Healthcare Quality Promotion. “It also means being aware of antibiotic resistance patterns in your facilities, following recommendations for preventing infections that can occur after surgery or from central lines and catheters placed in the body, and prescribing antibiotics correctly.”

CDC efforts, in addition to efforts by the Centers for Medicare and Medicaid Services (CMS), the Agency for Healthcare Research and Quality (AHRQ), and state mandates for public reporting of HAIs, have all contributed to national progress in improving transparency, accountability, and quality related to patient safety.

“The good news is that we are preventing healthcare acquired infections, which has saved thousands of lives,” said Patrick Conway, M.D., M.Sc., Deputy Administrator and Chief Medical Officer at Centers for Medicare and Medicaid Services. “The challenge ahead is how we help to prevent antibiotic resistance as well as infections. We are using incentives, changes in care delivery, and transparency to improve safety and quality for patients.”

Congress has recognized the urgent need to combat antibiotic resistance. In fiscal year 2016, Congress appropriated $160 million in new funding for CDC to implement its activities listed in the National Action Plan for Combating Antibiotic-resistant Bacteria. With this funding, CDC will fight the spread of antibiotic resistance by:

As part of the ongoing effort to improve patient safety, CDC and other federal partners will participate in National Patient Safety Awareness Week 2016, March 13 through March 19.