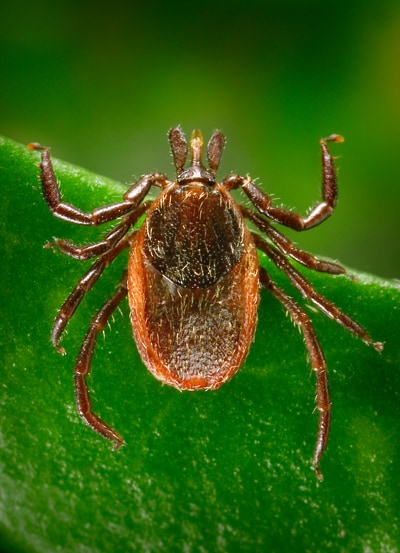 The Centers for Disease Control and Prevention, in collaboration with Mayo Clinic and health officials from Minnesota, Wisconsin, and North Dakota, report the discovery of a new species of bacteria (Borrelia mayonii) that causes Lyme disease in people. Until now, Borrelia burgdorferi was the only species believed to cause Lyme disease in North America.

Scientists at the Mayo Clinic in Rochester, Minnesota, first suspected the possibility of new bacteria after lab tests from six people with suspected Lyme disease produced unusual results, according to the findings published today in Lancet Infectious Diseases. Additional genetic testing at the Mayo Clinic and CDC found that the bacteria, provisionally named Borrelia mayonii, is closely related to B. burgdorferi.

“This discovery adds another important piece of information to the complex picture of tickborne diseases in the United States,” said Dr. Jeannine Petersen, microbiologist at the Centers for Disease Control and Prevention.

So far, new Lyme species found only in upper Midwest

Limited information from the first six patients suggests that illness caused by B. mayonii is similar to that caused by B. burgdorferi, but with a few possible differences. Like B. burgdorferi, B. mayonii causes fever, headache, rash, and neck pain in the early stages of infection (days after exposure) and arthritis in later stages of infection (weeks after exposure). Unlike B. burgdorferi, however, B. mayonii is associated with nausea and vomiting, diffuse rashes (rather than a single so-called “bull’s-eye” rash), and a higher concentration of bacteria in the blood.

The researchers believe that, like B. burgdorferi, B. mayonii is transmitted to humans by the bite of an infected blacklegged (or “deer”) tick. B. mayonii has been identified in blacklegged ticks collected in at least two counties in northwestern Wisconsin. The likely exposure sites for the patients described in Lancet Infectious Diseases are in north central Minnesota and western Wisconsin. It is highly likely, however, that infected ticks are found throughout both states.

The newly recognized species was discovered when six of approximately 9,000 samples drawn from residents of Minnesota, Wisconsin, and North Dakota with suspected Lyme disease between 2012 and 2014 were found to contain bacteria that were genetically distinct from B. burgdorferi. Scientists analyzed the DNA sequences of these bacteria and found that they belonged to a previously unrecognized Borrelia species. Blood from two of the patients was also tested by culture at CDC, whereby the organism is grown in the laboratory.

To date, the evidence suggests that the distribution of B. mayonii is limited to the upper midwestern United States. The new species was not identified in any of the approximately 25,000 blood samples from residents of 43 other states with suspected tickborne disease taken during the same period, including states in the Northeast and Mid-Atlantic region where Lyme disease is common.

Results from the cases described in this report suggest that patients infected with B. mayonii will test positive for Lyme disease with currently available Food and Drug Administration-cleared Lyme disease tests. Specific identification of the organism can be made by using polymerase chain reaction assays (PCR.), which detects the DNA of the Lyme disease bacteria. In some instances, B. mayonii bacteria may also be seen on a blood smear.

The patients described in this report were treated successfully with antibiotics commonly used to treat Lyme disease caused by B. burgdorferi. CDC recommends that health care providers who treat people infected with B. mayonii follow the antibiotic regimen described by the Infectious Diseases Society of America.

CDC is working closely with state health departments in Minnesota, North Dakota, and Wisconsin to better understand B. mayonii and to plan future investigations, including better descriptions about the clinical aspects of the illness and the geographic extent of the infected ticks.

To further support advances in the detection and discovery of tickborne diseases, CDC in 2015 funded a partnership with the Minnesota Department of Health, Mayo Clinic, Tennessee Department of Health, and Vanderbilt University to collect over a 3-year period up to 30,000 clinical specimens from patients with suspected tickborne illness. CDC will use advanced molecular detection methods, including metagenomics screening and whole genome sequencing, to test the specimens for other bacteria that cause tickborne illness.

To reduce the risk of tick bites and tickborne diseases, CDC recommends that people:

CDC works 24/7 protecting America’s health, safety and security. Whether diseases start at home or abroad, are curable or preventable, chronic or acute, stem from human error or deliberate attack, CDC is committed to respond to America’s most pressing health challenges.

Preventive health care can help Americans stay healthier throughout their lives. Those enrolled in health insurance coverage can use the “Roadmap to Better Care and a Healthier You” (English and Spanish) to learn about their benefits, including how to connect to primary care and the preventive services that are right for them, so that they can live a long and healthy life.