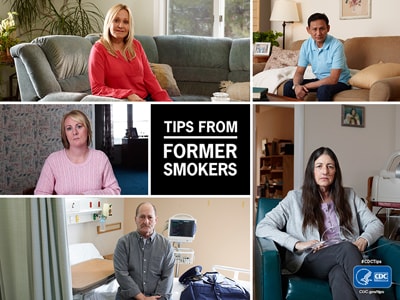 A brand-new series of emotionally powerful ads kick off the fifth year of the Centers for Disease Control and Prevention’s “Tips From Former Smokers” campaign. The new ads tell moving, personal stories of Americans suffering from smoking-related illnesses, including heart disease, tooth loss, depression, and chronic obstructive pulmonary disease (COPD). Beginning January 25, the ads will run consecutively for 20 weeks on television, radio, billboards, online, and in magazines and newspapers.

In 2015, Tips ads had an immediate and strong impact, showing the campaign’s sustained success since its launch in 2012. When the ads were on the air, about 62 percent more people called the national quitline, 1-800-QUIT-NOW, for free help. Since 2012, Tips ads have generated more than 600,000 additional calls to the toll-free quitline number.

“More than 30 courageous people have shared their stories through the Tips campaign since 2012,” said CDC Director Tom Frieden, M.D., M.P.H. “These real-life stories show, in a way that statistics can’t, the suffering and disability smoking causes.  Most Americans who have ever smoked have already quit, and most people who still smoke want to quit – this campaign will help them try and help them succeed.”

One of this year’s new ad participants is Becky, 54, an attorney from Ohio, who started smoking at 16. By the time she was 45, Becky was a mother of two and had her dream job as a child-advocate attorney. Then Becky was diagnosed with COPD. She had to quit her job and suffered a collapsed lung. She managed to quit smoking at age 52, but now has end-stage COPD and is tethered to an oxygen tank at all times.

Smokers who cut down on the number of cigarettes by adding another tobacco product, like e-cigarettes, still face serious health risks. Smokers must quit smoking completely to fully protect their health — even a few cigarettes a day are dangerous.

Cigarette smoking remains the single largest cause of preventable disease and death in the United States, killing more than 480,000 Americans each year. And for every American who dies from a smoking-related disease, about 30 more suffer at least one serious illness from smoking.

Besides the harm it does to peoples’ lives, cigarette smoking also seriously harms the U.S. economy. It costs more than $300 billion a year — nearly $170 billion in direct medical care for adults and more than $156 billion in lost productivity. The Tips campaign is an important counter to the more than $9 billion spent annually by the tobacco industry to make cigarettes more attractive and more affordable, particularly to young people.

The Tips ads encourage smokers to call 1-800-QUIT-NOW or to visit www.cdc.gov/tips to view the personal stories from the campaign. The website includes detailed assistance developed by the National Cancer Institute to support smokers trying to quit. For more information on the Tips campaign, including profiles of the former smokers, other campaign resources and links to the ads, visit www.cdc.gov/tips.